Six Armed Robberies Against Vessels In Singapore Strait During October 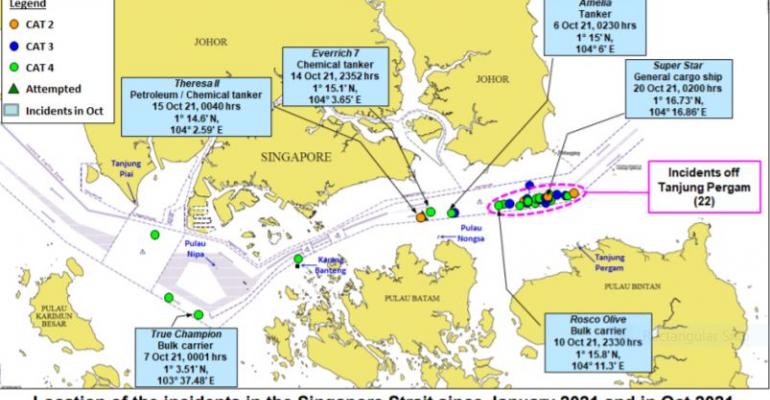 ReCAAP Information Sharing Centre has issued another alert on boarding of vessels in the Eastbound lane of the Singapore Strait with six incidents this month.

The latest incidents of armed robbers boarding vessels in the Eastbound lane of the Traffic Separation Scheme bring the total number for 2021 to 32.

In two of the six incidents in October the robbers were armed, in one case with knives, in the other with guns. In the other four incidents the perpetrators were unarmed.

The crew of the vessels were uninjured in all incidents and engine spares were stolen in three.

ReCAAP warned of further incidents in the area given that the perpetrators have not been arrested.

For vessels transiting the busy waterway ReCAAP said: “All ships are advised to intensify vigilance and maintain look-out while transiting the area, particularly during night time, adopt preventive measures and report all incidents immediately to the nearest coastal state.”

It also called on the coast states to take action. “The ReCAAP ISC urges the littoral States to increase patrols in their respective waters, respond promptly to incidents reported by ships, strengthen coordination among the littoral States and promote information sharing on incidents and criminal groups involved in order to arrest the perpetrators,” it said.