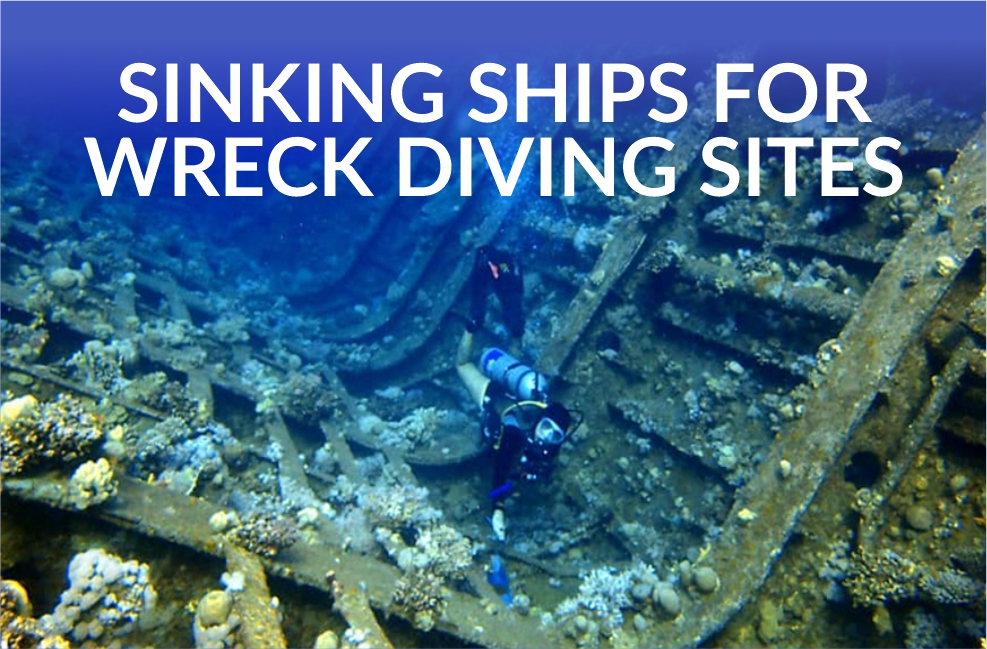 The technique of scuttling old ships to create artificial reefs ideal for wreck diving, to profit commercially from recreational diving off the shipwreck, or to create a diver training site is known as sinking ships for wreck diving sites.

To minimize the negative environmental effects and maximize utility, the vessel should be chosen and prepared, as well as the site, with proper regard for the local ecology.

Several steps must be taken to ensure that a hulk is safe for the marine environment and divers before it sinks as a wreck site. The ship is purged of all lubricants, hydraulic fluids, and hazardous substances like PCBs to safeguard the environment. Much of the superstructure may be removed to avoid the risk of corrosion causing it to cave in. Similarly, the ship’s interior has been stripped of corrosive components that may endanger divers if they broke free. The ship is extensively cleaned, frequently with the assistance of volunteer divers.

Scrapping the ship’s cargo, especially precious items like copper wire, might help recoup some of the costs of prepping and sinking the ship. Cutting gaps in the hull and inner bulkheads, as well as removing doors and hatch coverings, might improve the hulk’s attractiveness as a diving site.

Several variables impact recreational diving site selection. The following must be taken into account potentially to compete for the economic and ecological aspects.

•          The wreck should not pose a substantial navigational hazard.

•          A shallow site in sheltered seas is ideal for optimal accessibility and diver safety.

•          The location should be close to a good harbor or launching point, in an area with current or planned recreational diving infrastructure, to decrease access costs.

•          More protected waters lower the danger to all divers and extend the wreck’s useful life as a diving attraction.

•          The wreck’s location will cause some environmental harm. An ecological impact assessment should reveal long-term implications that are acceptable.

•          The site will have an impact on the marine species that will colonize the wreckage, as well as their growth pace. Some diving sites may be more appealing than others.

•          The location will alter the rate of silt deposition in and on the wreckage, affecting both safety and local ecology.

Since the preparation process eliminates a large amount of weight, the ship floats higher in the water than usual. To avoid excessive rolling in port or when towing, it may be essential to stabilize the vessel by filling some compartments with water as improvised ballast tanks. The ship is towed to the sinking spot, which is normally in shallow seas that enable several divers access yet are deep enough to be mostly undisturbed by surface weather. In a controlled demolition, the ship is normally scuttled with shaped explosives. The holes might be blasted such that the engine room and stern, which are heavier, flood first, followed by the rest of the hull. The goal is to sink the ship while it is standing.

When ships are sunk as recreational dive sites, they can provide wreck diving opportunities where none previously existed, as well as wrecks that are especially suitable for penetration by less skilled and experienced divers, when they are prepared for the purpose by removing potential hazards and contents that would contaminate the site or region. Some divers, however, believe them to be contrived, less intriguing, and less demanding, and prefer to explore the relatively unknown or mysterious environs of historic and notable wrecks that occurred outside of premeditated scuttling activities, believing them to be more real.

Scuttling programs may alleviate the potential of unlawful intended damage by wreck-robbers, who will target wrecks where there are more likely to be artifacts worth taking, but they do not eliminate the possibility of illegal intentional damage by removal of artifacts by wreck-robbers.