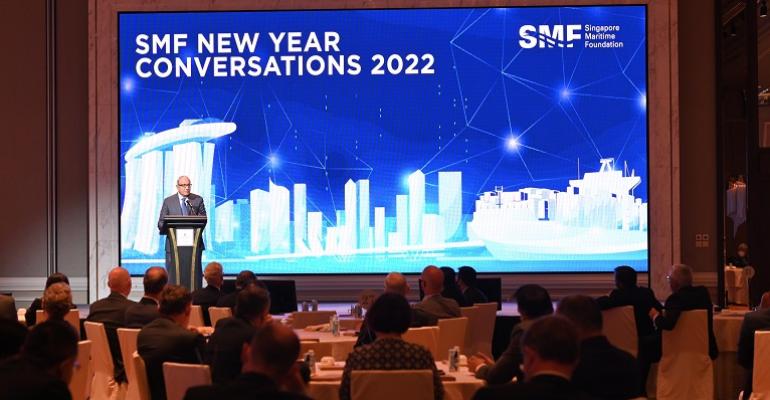 Singapore retains its position as the world’s second busiest container port and again ranks top in as the top maritime city in the world by a Norwegian report.

S Iswaran, Minister for Transport and Minister-in-charge of Trade Relations, announced that Singapore retained its position as the world’s largest container transhipment hub with a volume of 37.5m teu in 2021, up 1.6% on the previous year. It remains the world’s second largest container port as a whole although volumes have fallen significantly behind Shanghai which reported a throughput of 47m teu.

The Lion City also remained the world’s largest bunkering crossing the 50m tonnes of annual sales for the second time in 2021. Some 50.04m tonnes of bunkers were sold in the port last year, including 50,000 tonnes of LNG as a fuel.

It was also revealed at the event that Singapore has been ranked the top Leading Maritime City of the World for a fifth consecutive time in the international benchmarking study by Norwegian classification society, DNV; and consultancy, Menon Economics.

Hor Weng Yew, chairman of SMF commented: “Maritime Singapore’s recognition in the DNV-Menon Leading Maritime Cities of the World 2022 report is a testament of the cohesiveness of the industry players across the ecosystem.

“The willingness of industry players to collaborate on common challenges—whether it is to address maritime decarbonisation or to support talent development—cannot be taken for granted. The Singapore Maritime Foundation will continue to work with the industry to build connectivity, foster innovation and nurture talent to sustain the growth of the sector.”