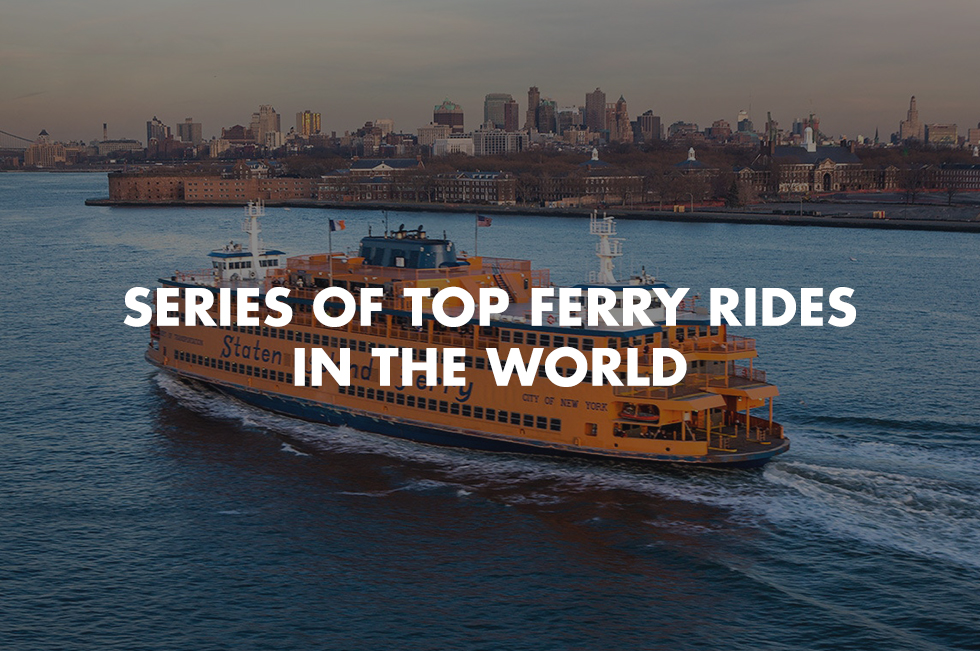 Humans being the most enthusiastic creatures feel the constant need of searching, discovering, and exploring new regions. Since ancient times, humans have used waterways to discover new places. Numerous sailors discovered the efficient way of traveling by sailing the vast oceans. Considering the ever-lasting urge of traveling and exploring new places in today’s world, we bring you our new series on numerous ferry rides across the globe! Let’s explore the less hectic, more convenient, effective, and most important much cheaper way of traveling! To start off with we have selected Hong Kong’s Star Ferry Ride.

Before we go any further, it will be convenient for us to know a little bit about the history of the ferry rides. We can describe a ferry as a vessel that is used to carry passengers, cargo, and vehicles. A ferry means a place, vessel, or boat where they carry passengers along with their luggage and deliver them from one place to another. If we trace back the history, we can uncover its early use in Greek Mythology, where Charon the ferryman carried the souls of the dead across the River Styx. The great importance of ferries has been the same since the ancient and medieval eras. As the emergence of the architectural industry was overdue, ferries were the only means of transport back then. A ferry can be of many types of simplest canoes or crafts to large motor-driven ferries with the capacity of carrying large cargo.

The United States history briefs us that the newly discovered world was divided into small regions due to the presence of numerous rivers and inlets. Though this was the condition, many regions defied the bridging. Eventually, the need of crossing the river surged and small boats propelled by oars and poles started sailing through the water. In due course, they were replaced by a large flatboat known as ‘Sweep.’ The journey of the ferries was largely depended on the weather where the horses were used to paddle the wheels to start a treadmill gear. In 1790, John Fitch operated the first ferry in the United States, though it failed due to financial reasons. The invention of steam power greatly contributed to the process of improving the ferryboats. The ever-increasing demand for sailing the water led to the creation of several ferry designs besides streamers. The structure of the newly designed ferries was a double-ended vessel with side paddle wheels and a rudder and pilothouse on both ends. The upper deck was designed for the pilots where the place of the lower deck was to carry the vehicles.

As we have learned a bit about the history of ferries, let us dive into the first famous ferry we have mentioned above.

The city known for architectural wonders such as Great Walls and Forbidden City offers you the exotic experience of traveling through the water. Since the emergence of Hong Kong’s ferry ride in 1888, it has been amusing the travelers with its journey of 11 minutes full of scenic and refreshing beauty of the surrounding. The company was founded by an Indian merchant Dorabjee Naorojee Mithaiwala, who initially named it “Kowloon Ferry Company.” The success of the company made the business flourish as it started with one boat and by the year 1898, it enable him to include the fleet of four boats; the morning star, the evening star, the rising star, and the guiding star in the group. Later, before his retirement, he consolidated the business with “Star Ferry Co. Ltd.”

In 1888, it was reported by a local newspaper that the ferry traverse between Wharf and Tsimshatsui on a 40 minute to one-hour trip. For the purpose of coaling, the service was halted on Mondays and Fridays. Later in the years, the ferry included a second deck. After the takeover of all the boats by Sir Cathchick Paul Chater, the ferry became the public company and derived with the name as it is known today, ’Star Ferry.’

The centenary of the company was celebrated in the year 1998. Today it poses 9 ferries in its fleet, which traverse between Tsimshatsui and Central Tsimshatsui and Wanchai. Along with this business, it has commenced the only licensed harbor tour (Harbour Tour) in Hong Kong in July 2003. Starting from 12 November 2006, due to the pier relocation for Central Reclamation Phase III, Star Ferry continues its ferry services at the Central Star Ferry Pier (Central Pier No. 7). The Central Star Ferry Pier with its elegant clock tower is the re-creation of a distinctive building, reinforcing the history and character of the Star Ferry with its identity as an important landmark at the new waterfront in Central.

Star Ferry ride travels 1 kilometer (0.6 miles) between the popular tourist places, Avenue of Stars and the Central piers in front of the IFC Tower and the mall. The boat sails in the Victoria harbor for the last several decades. The Star Ferry ply from the cross harbor tunnel of Central Star Ferry pier to Tsim Sha Tsui and from Wan Chai Star Ferry Pier to Tsim Sha Tsui. The time it takes is 11 to 12 minutes.

To enjoy the best view of the harbor one can opt for the ferry ride, commuting from Central Star Ferry pier to Tsim Sha Tsui.  The journey offers you to visit the Hong Kong Maritime Museum and the giant Ferris wheel. Whereas, on the route of In Tsim Sha Tsui you can get an entry into the Avenue of Stars alongside the symphony of lights, Hong Kong’s largest harbor city mall, and the museum of space and art.

The transport facility includes the bus and taxi. Taxi’s commute through the ICC and the West Kowloon HSR station to Tsim Sha Tsui Star Ferry. Star Ferry Ride offers Star Ferry mini-tour plan. The entry will be given once you buy the tokens and drop them in the box near the gate.

At present, the look of the harbor has undergone some changes as the reclamation project has been conducted. The width of the route between Tsim Sha Tsui and Central is half of the previous width. Even In 2019, the harbor has undergone considerable construction. Taking the Star Ferry ride is one of the wonderful ways to experience the memorable journey you will come across of sailing through the water.