Series Of Major Oil Spills In The History Of Maritime 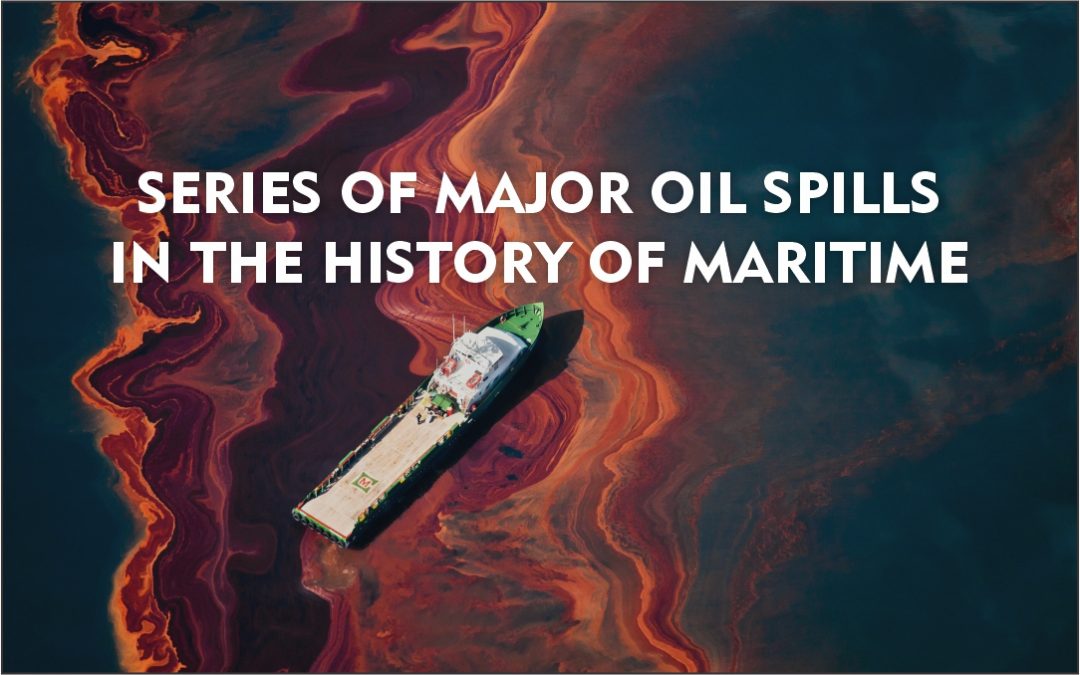 Maritime Industry has witnessed both boon and bane, on one hand, the ever-growing industry has introduced us to a world full of wonder and possibility, while on the other it has disclosed the dangers it can bring upon us if we are not careful enough. Through times, due to the irresponsible, or amateurish nature of humans, the world has seen many catastrophes resulting in loss of lives, loss of habitat, invasive species, overexploitation, pollution, climate change, and much more.

As man-made disaster include n number of things, oil spill disaster has always remained on the top that endangers our seas and oceans in no time. Although the introduction to petroleum has helped humans evolve and grow in different fields, it can severely affect the environment we live in. From being an immediate fire hazard to contaminating drinking water supplies that leads to the spreading of waterborne diseases; oil spills have negatively impacted the course of movement. Considering the harmful effect, many leaders across the world are taking steps to curb global warming, increase the production of renewable energy, and reduce dependency on fossil fuels, it’s safe to say that it’ll take decades or even centuries to undo the damage we’ve already caused but one step towards sustainability is the need of an hour.

In this series, we bring you the list of major oil spills in the history of the Maritime World and how they affected the surroundings creating chaos and destruction.

Persian Gulf War is a perfect example of irresponsible human activities where an urge to win is more significant than the lives of others. In the year 1991, the entire globe witnessed one of the largest oil spills in history.

Beginning the war in 1990, Iraq’s leader Saddam Hussein ordered the invasion and occupation of Kuwait with the apparent aim of acquiring that nation’s large oil reserves, canceling a large debt Iraq owed to Kuwait. In order to expand Iraqi power in the neighboring countries, Saddam Hussein televised a verbal attack on Kuwait and the United Arab Emirates for exceeding the oil export quotas that had been set for them by OPEC. Kuwait was accused of stealing oil from the Al-Rumaylah oil field, which straddles the border between Iraq and Kuwait. Following this, Iraqi armored divisions invaded Kuwait.

After acquiring Kuwait city with some difficulty, Iraqi troops began a systematic campaign of pillage, rape, torture, murder, and theft of Kuwait’s economic assets. Also, it was reported that Iraqi soldiers carried out hundreds of extrajudicial killings and prisoned several thousand Kuwaiti civilians.

As the international response to the invasion was swift, Iraq further continued to push its Military troops in Saudi Arabia. Viewing this, the coalition of British, French, Egyptians, Saudis, Syrians, and others to dislodge the Iraqis was led by the U.S. A Rapid Deployment force was immediately dispatched by the U.S which included the “ready brigade” of the 82nd Airborne Division, the U.S. Marine Corps First Expeditionary Force, and two squadrons of U.S. Air Force F-15s. They also deployed Two U.S. Navy carrier battle groups to the Persian Gulf.

In order to deter the coalition from landing marines and other amphibious troops in northern Kuwait and southern Iraq, Iraqi forces released hundreds of millions of gallons of oil from Kuwait’s sea Island terminal into the northern Persian Gulf. Iraqi soldiers opened pipelines and the valves of oil wells and set the fire as a measure to block the forces of the United States from landing in the area. It was estimated that around 380 million to 520 million gallons were poured into the gulf. Later, Iraqis refuted allegations that they had intentionally caused the spill, claiming that American airstrikes had caused a discharge of oil from two Iraqi tankers.

In January 1991, the fire started after opening the first well lasted till the capping of the last well in the month of April 1991. The millions of gallons discharged resulted in the mass killing of aquatic life and distortion of neighboring shores. Classified as environmental terrorism, the consequence and the exact amount of loss are still debatable.  Further, it is estimated that soot emissions for the burning oil and gas were around 24,000 tons per day. Most of the soot particles accumulated at altitudes between 1000 and 3000 meters and very little contamination reached higher than 5000 meters. As a result, the soot did not spread over large areas but fell out with rain and dew mostly over the Arabian Peninsula. The high volume of particles in the air had a very pronounced effect on the climate in Kuwait and in the neighboring countries. Temperatures were up to 10 degrees C lower than under normal years. Soot and oil-covered extensive areas in Kuwait, Northern Saudi Arabia, and the Gulf. Till the month of October 1991, all the wells were capped.

Due to the Oil Spill, the pollutants remained in water, land, and air burrowing up to 40 cm in the sand and mudflats to date can be observed. Most of the crude oil that traveled to the south remained behind Abu Ali Island located north of Jubail, Saudi Arabia. 706 kilometers of coastline in Saudi Arabia were covered in oil; 366 km were categorized as heavy and 220 km as moderate. Also, no signs of living epibiota in the upper intertidal zone were found even after one year of an oil spill. Gulf War highlighted devastating long-term environmental impacts that cannot be undone caused due to the carelessness of humans while handling the resources.