Series Of Deepest Shipwrecks Still Waiting To Be Discovered 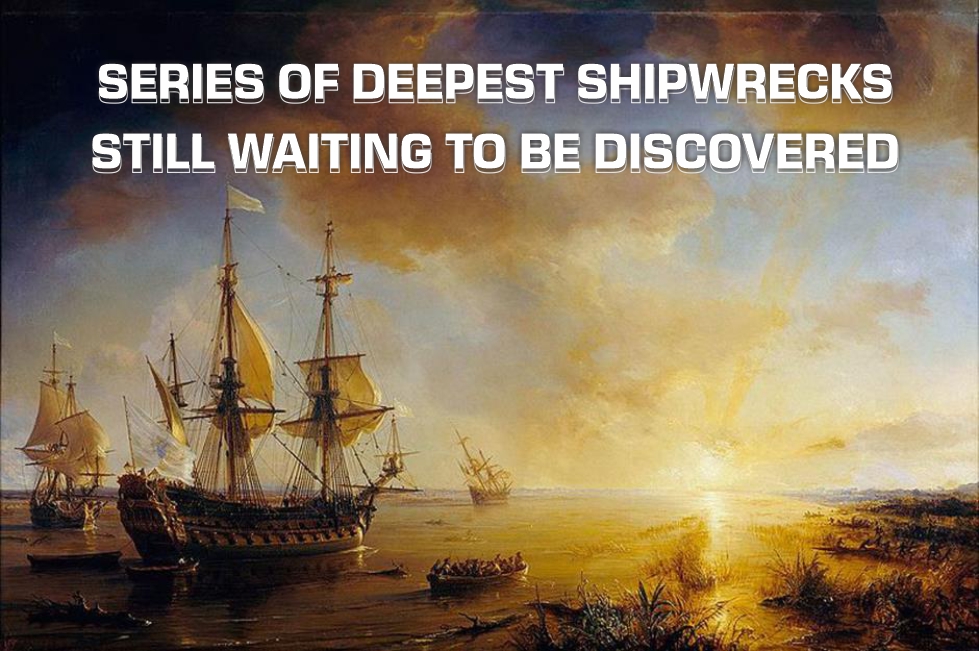 There’s something horrifyingly fascinating about a mysterious disappearance, and vast oceans offer seemingly endless space to vanish. The true fate of many of the ships will never be known, but speculation suggests that storms, piracy, mutiny, accidental bombing, and even the attack of a giant squid could be responsible for their vanishing. In this blog, we are going to talk about “a series of famous shipwrecks still waiting to be discovered”. A few shipwrecks in history have been so horrifying and frightful that they have piqued our interest. On this subject, we shall first go over the most famous shipwrecks in history still waiting to be discovered.

The first one on our list is the most famous ship in the history that still lies undiscovered in the seabed and many attempts have been made to locate and salvage the shipwreck. Portugal, Indonesia, and Malaysia all claim salvage rights on this shipwreck. A replica of Flor do Mar is housed in Maritime Museum of Malacca. And the worth of this ship is estimated to be around three billion dollars. Here, we present you

The Flor de la Mar, also known as the ‘Flor do Mar’, became one of the most famous shipwrecks in history after sinking in early 1512. Flor de la Mar was built in 1502 in Lisbon. She weighed 400 tons with a length of 120 feet and a height of 110 feet, making her the largest vessel of its kind at that time. She was armed with 40 cannons distributed over three decks, with a high stern and forecastle from which the crew would rain down fire on her enemies, but this top-heavy design also made for poor stability when fully laden. The ship, whose name means “flower of the sea”, is considered to be the holy grail of sunken treasures.

The Flor de la Mar began her maiden voyage in 1502 under the command of Estevao da Gama, a Portuguese navigator and an explorer, a cousin of Vasco da Gama, returning to Portugal in 1503, attributed with the discovery of the Trindade and Martim Vaz islands. She was carrying priceless gifts of precious stones, metals, and rare artefacts intended for the Portuguese Queen Dona Maria and King Manuel I. However, her return trip in 1503 met some complications. Eyewitness Thome Lopes reports her springing leaks and being forced to stop for repairs on Mozambique Island for nearly two months. She finally arrived in Portugal in late 1503.

She left for her next voyage from Lisbon in 1505 under the captaincy of Joao da Nova as part of the 7th Portuguese India fleet of 22 ships. Francisco de Almeida was named the first viceroy of Portuguese India. On her return trip in 1506, she once again ran into difficulties in the Mozambique Channel, springing leaks. She was forced to dock once again on Mozambique Island for lengthy repairs. This time, she was stuck in the channel for about ten months. Nova repeatedly attempted to take her out, but the heavy-laden ship kept running into problems, forcing him to return to the island, repair, and try again.

The ship and her frustrated captain were still stuck in Mozambique when they were found in February 1507. Almost exactly one year after Flor do Mar left India, the outgoing 8th India armada under the command of Tristao da Cunha arrived. Cunha ordered his crews to help repair the ship back to seaworthy shape, unload the ship’s spice cargo onto another Portugal-bound transport (under the command of Antonio de Saldanha) and then annexed the empty ship. She never returned to Portugal.

In 1506, Tristao da Cunha was appointed the commander of a fleet of 15 ships and was sent on a mission by the Portuguese crown to conquer the island of Socotra and to close the trade in the Red Sea. On arriving in the Mozambique channel, the fleet encountered the Flor de la Mar and integrated the ship into a squadron under the command of Afonso de Albuquerque.

With the fall of Malacca, the last Sultan, Mahmud Shah, fled across the Malay Peninsula to Pahang on the east coast, where he made a futile effort to enlist Chinese aid. The Portuguese gathered all the riches from the Sultan’s royal palace, loading the treasure onto the Flor de la Mar bound for the court of King Manuel I in Lisbon.

Some sources also report that the ship was carrying a tribute from the King of Siam for Manuel, along with the personal fortune of Albuquerque (including the bracelet of the Rajah of Sabandar), making the cargo one of the largest treasures ever assembled by the Portuguese navy.

While returning from this final invasion, in 1511, the already battered Flor de la Mar was run onto a shoal by a storm. The wrecked ship sank while carrying the treasures of Malacca and a tribute to the Portuguese royal family from the King of Siam, according to Ancient Origins. Five men were rescued from the ship, including its infamous captain, Alfonso de Albuquerque, while 400 men died. But the ship was never been found and is still missing!

The renowned American diver Robert Marx, best known for diving for shipwrecks and treasure hunting, reportedly spent millions in an effort to find the Flor de la Mar, calling the ship “the richest vessel ever lost at sea.”