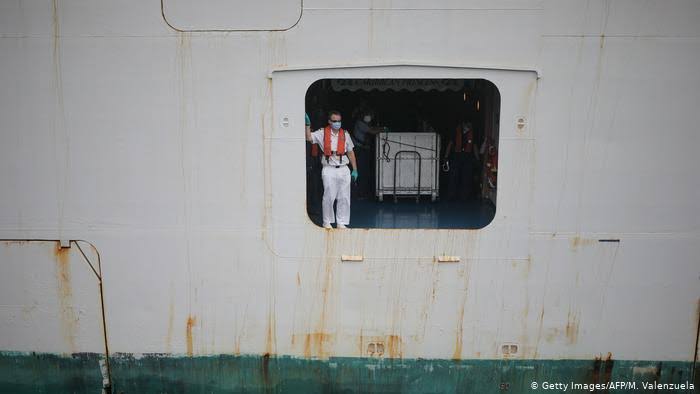 It will be even harder to convince governments to allow seafarers passage through their ports and airports if more shipboard outbreaks occur. And while still relatively rare, new incidents are indeed emerging.

In the past two weeks, 15 of 28 crew aboard the tanker Minerva Oceania tested positive, as did 10 of the 23 crew on the container ship Maersk Idaho.

The consequences may extend far beyond these two ships and their crews. Future fallout from the crew crisis could effect all shipping segments, from tankers to dry bulk to container shipping to gas transport.

FreightWaves asked Fabrizio Barcellona, assistant secretary of the seafarer section of the International Transport Workers’ Federation (ITF), whether he feared more shipboard outbreaks could make it even harder to lift crew travel restrictions.

“I am very much concerned that the recurrent news of a possible second wave of COVID-19 will impact the already strenuous situation of a few hundred thousand seafarers still waiting to be repatriated,” he replied.

If there are not enough crew left on ships with unexpired work contracts, vessels will be detained for failure to meet minimum manning requirements. Ocean transport would start grinding to a halt, impairing economic recovery efforts.

“I fear that with the over-exhausted seafarers, not many ships will be left in position to trade,” warned Barcellona. “We have tried to alert countries that something needs to be done now, because the situation may deteriorate further.”

“The supply chain is under threat. There’s no doubt about it,” said Guy Platten, secretary general of the International Chamber of Shipping, during a webinar presented by Capital Link on Wednesday.

The Minerva Oceania case is about more than sick seafarers. There are also questions about the captain’s health declaration.

When any ship comes into any port, a captain is required to declare if there are any sick crew. If a captain does not, it would allow a loading or unloading to go forward, but it would also put the pilot and port workers at risk.

The Minerva Oceania is managed by Greece-based Minerva Marine. The ship loaded a cargo at the Ras Laffan Condensate Refinery in Qatar on May 17 and arrived in Antwerp, Belgium, on June 19, according to data from Signal Ocean. Vessel positioning data shows that the ship is still in Antwerp.

Minerva Marine hired MTI Network, a crisis communications company, to handle press inquiries. MTI Senior Partner Cor Radings told FreightWaves that of the 26 crew, 15 tested positive. Three were hospitalized but their conditions were not serious, and one of them returned to the ship. The 13 crew on board who tested positive are in isolation in their cabins. The captain and chief engineer are among the 11 seafarers testing negative.

According to Belgian press reports, one of the two pilots who boarded the ship upon its arrival has tested positive. The pilot infection spurred criticism of Belgium’s Maritime Services and Coastal Agency (MDK).

Local source reported that the MDK has subsequently launched an investigation. It quoted an MDK spokesperson as stating, “We doubt that the captain’s health declaration has been completed in good faith.”

Radings countered that “the master reported the first case of COVID-19 symptoms onboard as soon as it occurred — one day after the vessel arrived in port and the pilots had disembarked.

“Minerva has taken note of the complaint of the MDK, who have questioned the reporting,” he said. Minerva will “cooperate with any official investigation,” he added.

The situation raises the issue of how the vessel returns to normal service. How will the sick crew be repatriated, given current travel restrictions? How will the new crew be brought to the ship? Would the tanker be able to sail without changing crew if over half of its seafarers have tested positive? If so, how would it call at the next port?

Radings said crew repatriation was currently under discussion and “will be conducted within the full context of regulations for safe manning and navigation.”

The case of the container-ship Maersk Idaho stands in stark contrast to the Minerva Oceania case.

There have been no questions about the reporting timing. Because the incident happened off U.S. shores and the crew were American, there were no crew-change hurdles. And the Maersk Idaho quickly returned to service.

Maersk Line General Counsel Patrick McCaffery told FreightWaves that a crew member was hospitalized with pneumonia symptoms on June 19 after the ship arrived in Newark, New Jersey, following a trans-Atlantic voyage. The seafarer had not been ashore since joining the Maersk Idaho in mid-April.

On Saturday, the ship was sanitized, the new crew contingent was brought aboard, and the 22 crew who had been on the vessel were quarantined in a Norfolk-area hotel. The crew member leaving the vessel in Newark has been discharged from the hospital and is in quarantine in that area, reported McCaffery. The ship left Norfolk Sunday and is scheduled to arrive in Houston on Thursday.