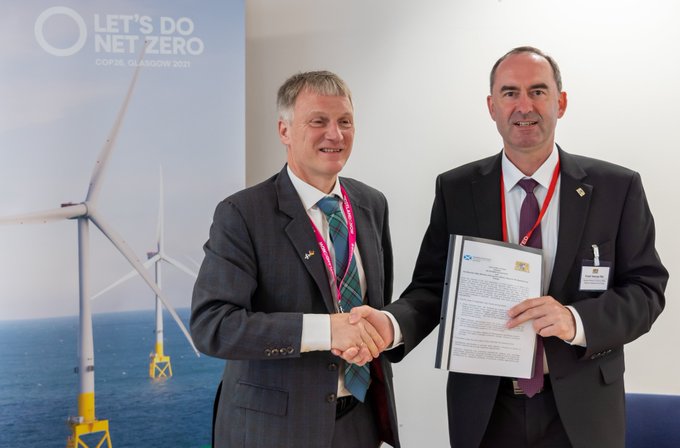 Germany’s largest state Bavaria and Scotland have decided to strengthen ties in the field of green hydrogen and explore the potentials of its transportation.

On 13 June, Hubert Aiwanger, Bavaria’s Economics and Energy Minister, and Ivan McKee, Scottish Minister for Economy, Trade and Tourism, signed a letter of intent in Glasgow to expand their existing business-scientific cooperation with green hydrogen.

“Scotland is a politically stable European partner with a potential of 25 percent of European wind energy generation at sea. This can be used to produce large quantities of hydrogen. Bavaria will also intensify the production of its own renewable energies. But that will not cover our needs,” Aiwanger said.

“The Scottish government is determined to promote the expansion of wind energy and is very open to cooperation with Bavaria. With our Center Hydrogen.Bavaria (H2.B), our hydrogen strategy geared towards technology development and the many innovative high-tech companies in the hydrogen sector, we are an attractive partner for Scotland. Bavaria supplies high-tech, Scotland green energy.”

In the letter of intent, the parties agreed green hydrogen trading, with Scotland as an exporting country of green energy and Bavaria as an importing country. Together, suitable hydrogen logistics routes including the appropriate infrastructure, certification, identification and support of joint demonstration projects are planned.

“Within Europe, we rely on reliable transport routes such as hydrogen pipelines and ship transport. Scotland intends to build a North Sea pipeline that will land in Lower Saxony. That is why it becomes more important to quickly connect Bavaria to the German pipeline network, which in the course of the transformation of natural gas will be switched to hydrogen,” Aiwanger further said.

Specifically, the newly agreed cooperation is centered around hydrogen technologies along the entire value chain with reciprocal technology export markets. What is more, the countries will cooperate in the field of innovation, research and development. Priorities lie in the areas of generation, storage, transport, conversion and use of hydrogen.

In addition, cooperation between Bavarian and Scottish companies and research institutions is to be promoted and intensified. The main focus here is on supporting innovation projects to support the energy transition through the use of hydrogen technologies.

“We will quickly put the declaration of intent into practice with a working group. Close cooperation must be achieved on a political, economic and scientific level. With our visit to Scotland, we have taken a big step towards the hydrogen economy – to the benefit of Bavaria,” Aiwanger concluded.

Germany has intensified efforts to build new supply chains and energy partnerships revolving around LNG, and later, green hydrogen. The country has been reassessing its energy and security policy in order to make itself independent of Russian energy imports.