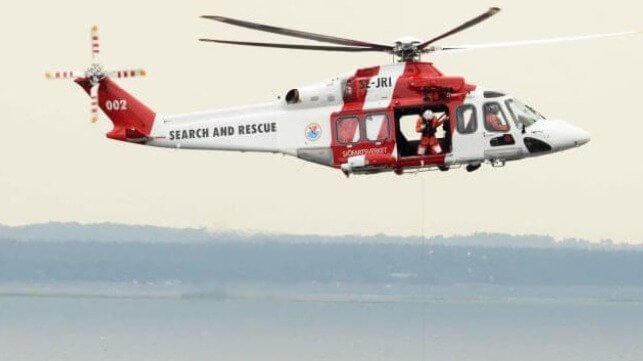 Swedish and Danish forces responded to a distress call on Thursday evening from a Norwegian coastal vessel that was in danger of sinking. They conducted a difficult nighttime rescue airlifting the crew to safety and while the investigation is ongoing, some sources are reporting that the crew said it was “harassed” by an unknown vessel leading up to the distress call.

What is known, is that the Norwegian registered general cargo ship Bjugnfjord (1,500 dwt) was sailing between Copenhagen and Randers in Denmark when it issued the distress call. The vessel, which is 213 feet in length, has a crew of five Norwegians and was reported to be carrying a load of topsoil.

Danish Defense’s maritime operations center reports that seas were very rough and that winds were approaching 30 miles per hour in the area. The vessel was in the sea lane between Skane in southern Sweden and Gilleleje in northern Denmark.

The distress call came in around 8 p.m. local time and the Swedish Maritime Authority dispatched two helicopters to search for the vessel along with one of its patrol boats while Danish Defense also sent two helicopters and a frigate. By the time they reached the small cargo ship, it had a severe list and they reported it was in danger of capsizing or sinking. The Swedish helicopter lifted two of the crew members from the deck of the vessel while the other three were taken from the vessel’s lifeboat and they were all flown to Sweden. No injuries were reported.

A spokesperson for Swedish Naval Air and Sea Rescue reported that it appears that the cargo might have shifted on the vessel, but the crew of the vessel reportedly told their rescuers that their vessel was being “harassed” by an unknown vessel. The British security management company EOS Risk Group Tweeted a message suggesting that it might have been a Russian warship saying the Russians were known to be “aggressive and conduct unsafe maneuvers,” in the region.

The duty officer at the Armed Forces’ Operation Center in Denmark told the reporters that it had not been possible “to speak to the crew and to get clarity on what happened.” He said they planned to interview the crew in the morning.

The ship’s owner, Fosenfrakt, speaking with TV 2 in Sweden said that the vessel was commanded by an experienced captain familiar with the waters. He thanked the rescue forces for their efforts and said they hoped to inspect the vessel in the morning.

A Swedish patrol boat and Danish frigate were standing by the vessel but said it was too rough to attempt to tow it at this time.