Russian Oil Still Flowing To Europe Via Waters Off Greece 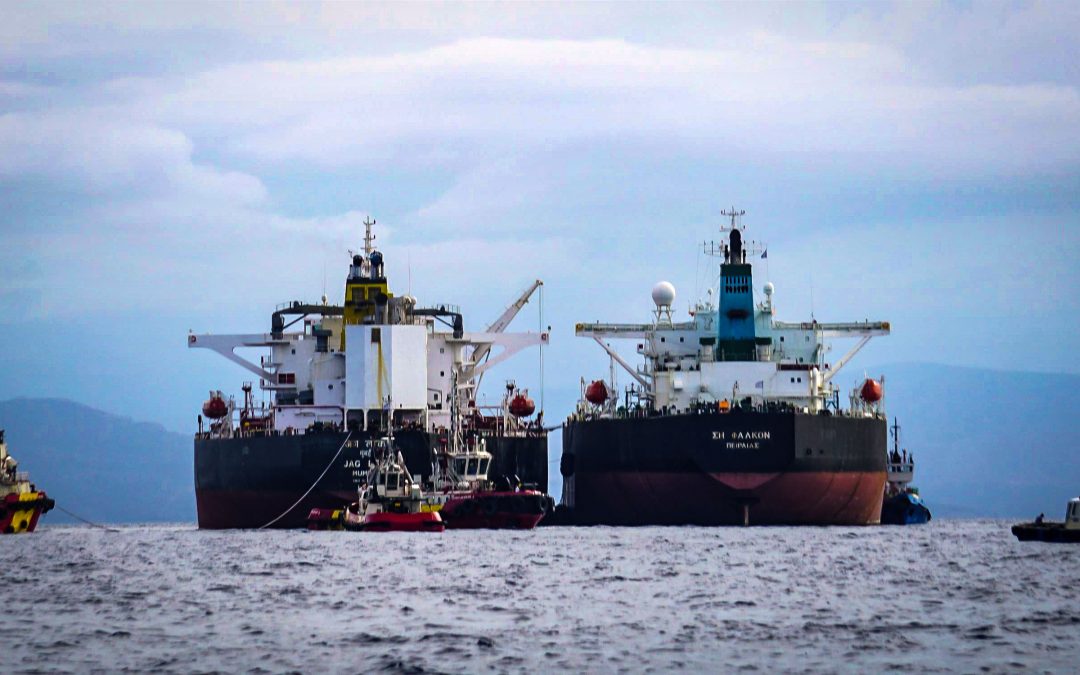 The West has sanctioned Russia over its invasion of Ukraine, but Russian oil continues to flow to Europe via hidden maritime routes.

A Nikkei analysis found that in the six months since Russia’s invasion of Ukraine began, 41 vessels made ship-to-ship transfers of oil off the coast of Greece with tankers that left Russia and later arrived at European ports. There was only one such vessel last year.

The European Union and the U.K. will completely ban imports of Russian oil from around the end of the year, but companies that buy Russian oil already face criticism. Transferring oil between ships at sea to hide its origin may continue even after the oil embargo takes effect.

On Aug. 24, Nikkei photographed the transfer of oil from one tanker to another in the Laconian Gulf near southern Greece. One tanker was the Greek-registered Sea Falcon, which left the port of Ust-Luga, an oil shipping terminal in northwestern Russia, on Aug. 4. The other was the Indian-flagged Jag Lok, which departed from a Turkish port of Aliaga on Aug. 4. Small boats surrounded the tankers, assisting with the transfer.

“There is a major risk of accidents causing oil to flow into the sea. Exhaust gas and garbage emitted by oil tankers are also a problem, causing trouble for both the fisheries and tourist industries,” said local resident Thalis Ladakakis. The 55-year-old man said the number of tankers has spiked since Russia’s invasion of Ukraine began on Feb. 24.

Where is the oil going? To look into the seaborne transport of Russian oil, Nikkei used data from British data company Refinitiv to see where tankers that left Russian ports, starting on Feb. 24, went and which vessels contacted them.

The survey covered waters off the Mediterranean coast of Greece, where ship-to-ship transfers frequently take place. Automatic Identification System (AIS) signals from vessels were tracked to identify their routes. Changes in the vessels’ draft — the distance from the waterline to the bottom of the hull, which increases when a ship is heavily laden — were also checked to determine the number of ship-to-ship transfers.

The question is where the tankers that received the oil went after taking on their loads.

Nikkei tracked the routes of the ships, confirming that 89 tankers arrived at ports, while only three such calls were made last year. Of those, 41 arrived at ports in Greece, Belgium and elsewhere in Europe. Only one tanker did so last year. Two tankers made port calls in Britain, which is a staunch advocate of economic sanctions against Russia. The survey highlighted the crucial role that waters near Greece play as a hub for oil shipments between Russia and Europe.

The EU will completely ban imports of Russian oil by sea from February 2023, while the U.K. will completely embargo Russian oil in December. According to the International Energy Agency, Russian oil exports to the EU in July totaled 2.8 million barrels per day, down 26% compared with January. While purchasing Russian oil remains legal, companies are reviewing their relations with Russia as governments and markets monitor them.

Nikkei also analyzed shipments of oil that arrived in Britain in June. Using Refinitiv’s route and draft data, as well as satellite images from U.S. company Planet Labs, Nikkei found that a Maltese-flagged tanker that took on oil off the Greek coast from two tankers that left Russian ports arrived at Immingham, in eastern Britain, on June 4.

Nikkei visited the group’s headquarters in Britain and asked for information about the transaction. The company responded, saying, “Prax Lindsey Oil Refinery cannot comment on operationally sensitive information about individual shipments. We are working closely with the U.K. government and can confirm that we are fully compliant with all relevant sanctions.”

Replying to an email inquiry, Trafigura said, “We engage openly and regularly with our customers and relevant governments to understand their requirements and ensure we deliver material that meets those requirements.” Rosneft did not respond to a request for comment.

Ship-to-ship transfers of oil are fairly common. Such transfers are sometimes used to consolidate shipments of oil into larger tankers, improving efficiency on long-distance routes. Oil sometimes changes hands after a tanker leaves port. In these cases, it becomes harder to identify where the oil comes from.

Countries require importers to report the place of origin of their cargo with customs authorities. But Yutaka Tsurusaki, a Japanese lawyer familiar with maritime law, said, “some companies falsely give the location of a ship-to-ship transfer as the place of origin to hide where the oil comes from.”

“The oil flow must be tracked by the port authorities, even if it is repeatedly transferred from ship to ship. They will be required to have an unprecedented level of experience and knowledge,” said Lloyd’s List Intelligence analyst Michelle Wiese Bockmann.

Julien Mathonniere, an oil market economist with Energy Intelligence Group, said: “If you mix up the different oils through ship-to-ship [transfers], no one can trace the origin. You can hide the origin and keep selling Russian oil, while mixing it up with other oil.” In its 2020 guidance for maritime shipping companies, the U.S. State Department urged them to be wary of deceptive practices, saying that “ship-to-ship (STS) transfers are frequently used to evade sanctions by concealing the origin or destination of surreptitiously transferred petroleum, coal and other materials.”

Greece’s Ministry of Shipping and Insular Policy told Nikkei: “Ship-to-ship transfers, which take place in international waters, are monitored by the local port authorities through the AIS system in real time. In case of any infringement, such as the entry of the vessels into Greek territorial waters, the procedure for the imposition of legal penalties shall be initiated.”

Territorial waters in eastern Greece extend 6 nautical miles (about 11 km) from the coastline, half the usual distance, due to tense relations with Turkey. The ministry says ship-to-ship transfer spots in the placid Laconian Gulf are “outside its territorial waters.”

The government is ignoring local concerns, arguing the oil transfers are taking place outside its jurisdiction. Stavros Arahovitis, a member of the Greek parliament whose constituency is near the gulf, complains, “The government might not act until some accident happens, even if I propose closing Laconian Gulf to the parliament.”

The U.K. and EU will stop importing Russian oil in December and February, respectively, and the Group of Seven wealthy democracies plan to set a price cap and restrict its distribution. Russia can be expected to counter by selling oil at a discount and increasing exports to Asia and other countries.

The West has imposed sanctions to cut off Russia’s sources of finance. But if Russian oil continues to flow, the effect of sanctions will be limited. Those hoping to encourage Moscow to alter its course in Ukraine will have to detect and crack down on oil transactions that seek to circumvent the restrictions.