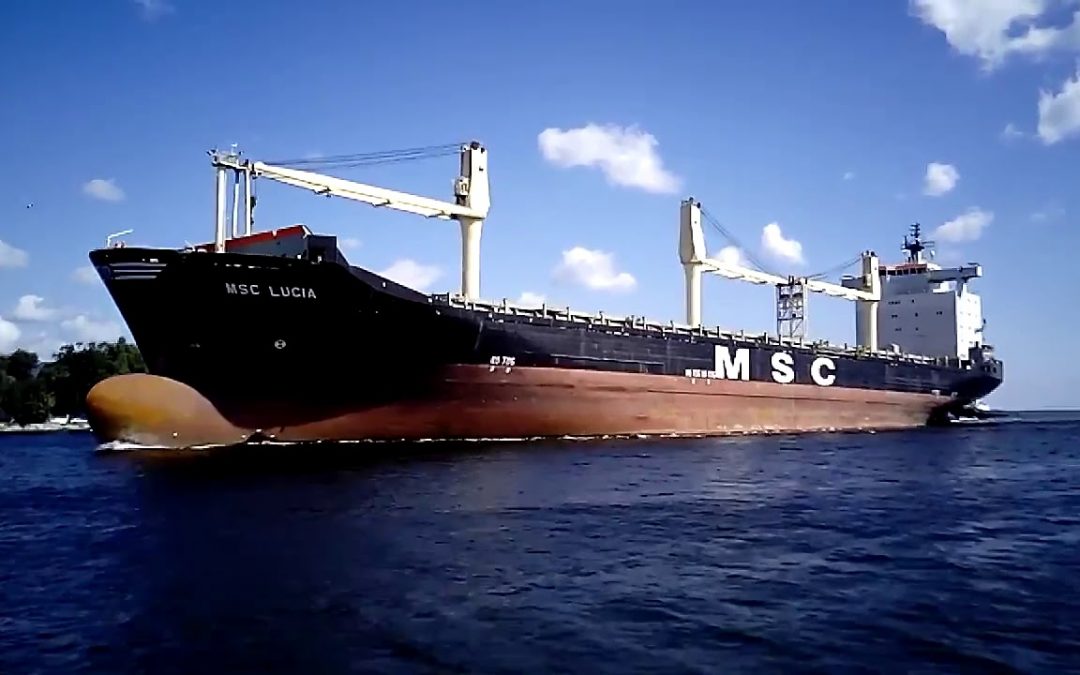 The container feeder MSC Lucia was attacked and boarded in the Gulf of Guinea on Monday, according to multiple sources, and the Russian Navy has claimed credit for chasing off the assailants. The UK-operated MDAT-GoG piracy reporting center confirmed a boarding in the middle of the Gulf of Guinea on the morning of October 25, but did not identify the vessel involved.

The Lucia called at the port of San Pedro in Cote D’Ivoire last week, then transited to Lome, Togo on October 22. She departed Lome on the morning of the 24th and headed southeast across the Gulf of Guinea. At about 0900 GMT on the morning of the 25th, at a position about 150 nm to the northwest of the island of Sao Tome, MSC Lucia slowed from 14 knots to a halt, based on AIS data provided by Pole Star.

In a statement, the Russian Ministry of Defense said that the destroyer Vice-Admiral Kulakov received a distress signal from the MSC Lucia on Monday morning. The merchant vessel reported that armed attackers had approached via speedboat and climbed aboard. Lucia’s crew had retreated to the engine room for safety.

In response, Kulakov launched her Kumov Ka-27PS helicopter carrying a boarding party of Russian marines. Upon seeing the approaching aircraft, the pirates fled the vessel, “got into a fast boat and headed towards the coast at full speed,” the ministry said.

The Kulakov transferred a boarding party to the MSC Lucia to search the ship and free the crew. As of Monday evening, MSC Lucia remained adrift at position 02 12 N 004 54 E.

Vice-Admiral Kulakov is currently operating in the Gulf of Guinea on a three-week deployment, accompanied by a fleet oiler and a rescue tug.