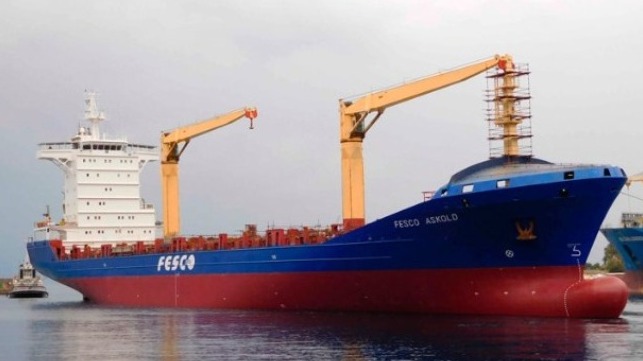 The Cypriot-flagged container ship Fesco Askold, operated by the Russian Far Eastern Shipping Company (Fesco) is being linked to a new outbreak of the COVID-19. Samoa and American Samoa are rushing to react to the possibility of exposure to the virus. Officials in Samoa, where there are no active cases of the virus, and American Samoa are seeking to isolate any contacts to prevent the introduction of COVID-19 into the community.

Built in China in 2006, the 13,875 dwt container ship departed Oakland, California on October 23 for her voyage across the Pacific. She reached Papeete, Tahiti on November 3 and then continued to Samoa on November 7 and American Samoa on November 8. The vessel has reportedly been placed in quarantine at anchor off Pago Pago while local authorities complete their assessment of the situation and develop a plan to offload and pick up containers.

Authorities in Samoa issued a statement saying that the vessel had been in port for less than 24 hours and followed a strict health protocol from the time it arrived offshore until it departed. Samoa’s health officials reviewed health documentation while the vessel was at the quarantine buoy, about a mile away from Matautu wharf, which was to include negative COVID-19 tests for the 17 crew on board. During the health inspection, all crew members, including the ship’s captain, are required to isolate in a designated room onboard the ship, before the vessel was cleared to proceed to the Matautu wharf. Crew is restricted to stay on their vessel with a guard on the pier while the cargo operations were ongoing.

Two days after the Fesco Askold departed Samoa, on Monday evening, November 9, health officials were informed that at least three crew members aboard the ship were infected with the virus. The positive tests were discovered during a health examination when the ship arrived in Pago Pago, American Samoa.

The following day, November 10, health officials in Samoa announced a series of precautionary actions to prevent the virus from spreading. The Samoan Observer is reported that a total of 17 people that came in contact with the vessel have now been placed in quarantine. This includes four people from the Ministry of Health and the Samoa Port Authority as well as 13 stevedores that docked the ship and unloaded the containers. Containers offloaded from this ship are reportedly also being “sterilized.”

In Pago Pago, the U.S. Coast Guard ordered the ship to leave the dock for quarantine after the positive tests for the virus. The port was closed for 24 hours and steps were taken to “decontaminate the dock in case of any contamination while the vessel was dockside.”

There have been no reports of community spread of the virus linked to the ship in either country, although officials in Apia have been criticized for their slow response to the notification. They responded by saying that they believe the risk is very low and that they do not believe any additional steps are required.