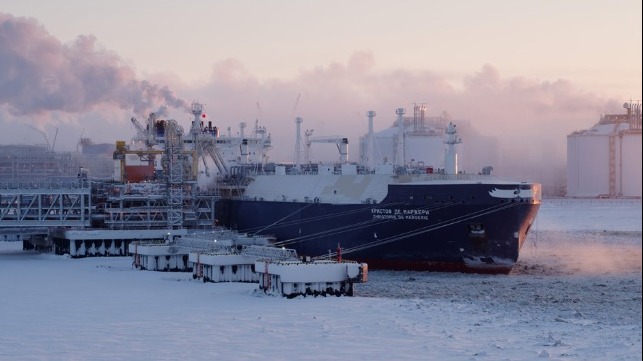 Russian media is reporting one of the NOVATEK ice-class Arctic LNG tankers chartered by the Yamal LNG project making late-season voyages may have experienced a propulsion problem. The vessel is running along the Northern Sea Route without the assistance of an icebreaker.

The LNG tanker Nikolay Yevgenov departed from Sabetta on January 6 and is scheduled to arrive in the Chinese port of Jingtang on January 28. She was completing an independent passage along the NSR approaching the Bering Strait when according to the Russian media outlet Kommersant the tanker slowed to approximately 3 knots. From tacking data, it appears she was stopped for several hours in the Chukchi Sea on the north side of the Strait.

Kommersant is reporting that the tanker was experiencing an unspecified problem with one of its three Azipods motors. Sources speculated to the media outlet that the Azipod might have been damaged and would require replacement while others thought it might be a software problem that could be corrected by an engineer. They speculated that the vessel would be delayed on its arrival in China. NOVATEK did not provide comments to the Russian media.

Tracking data from Pole Star, however, shows that the vessel has now made it out of the ice areas into the Bering Sea. It was reported to be traveling at normal speeds on a southwesterly course off the Kamchatka Peninsula.

Russia has been promoting the benefits of the NSR with the government strongly encouraging the shipping companies to expand the use of the route. Previously, the navigation season in the Eastern part of the Arctic ended in November, but this year NOVATEK announced that they would be testing late-season voyages.

The first of the LNG tankers, the Christophe de Margerie left the Yamal facility on January 5, followed a day later by the Nikolay Yevgenov. The Christophe de Margerie completed an independent passage along the Eastbound part of the NSR on January 16, having reached the Bering Strait in 11 days with an average safe speed of 9.6 knots. NOVATEK reported that the two tankers would deliver approximately 140 thousand tons of LNG produced at Yamal LNG to destinations in the Asia-Pacific Region reducing the transit time by approximately 40 percent versus using the route through the Suez Canal.

Another Arc7 ice-class LNG tanker, the Nikolay Zubov was reported traveling in the opposite direction to the port of Sabetta after offloading its LNG cargo. It entered the Westbound ice route along the NSR on January 6 and reached the Ob Bay on January 17.

Later runs along the route will likely require an icebreaker to accompany the vessels. Last spring, the Christophe de Margerie completed a transit in May which at the time NOVATEK said was the earliest seasonal run on the route.

Russia is continuing to aggressively expand its fleet for service along the NSR. This week NOVATEK announced that a steel cutting ceremony had taken place at the Zvezda Shipbuilding Complex for another Arctic7 ice-class LNG tanker as part of an agreement to build a total of 14 similar tankers.