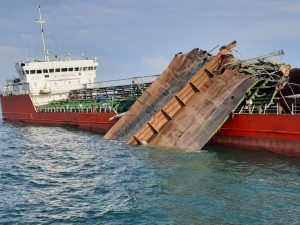 Russian authorities reported that they now believe they have located the remains of three sailors missing after the tanker they were aboard exploded. Ten additionally seafarers, including the captain of the tanker, were rescued.

Earlier, Russia’s Marine Rescue Service reported that it had called off the search for the missing sailors. The Moscow Interregional Transport Investigation Department of the Investigative Committee of Russia. however, late today reported that its investigators believe they have found the remains of the three missing sailors. Genetic tests were ordered to establish the identity of the dead while investigators are also exploring possible violations of fire safety requirements on the tanker.

The tanker General Azi Aslanov was underway empty transiting the Kerch Strait in the Sea of Azov on October 24 when the explosion ripped the tanks and deck apart. The 6,444 DWT tanker, owned by Palmali Shipping, was sailing from Kavkaz to Rostov-on-Don. Russia’s Marine Rescue Service responded to the distress call finding the tanker adrift without power and seriously damaged. The starboard side of the vessel suffered the bulk of the damage and the vessel was listing as much as 10 degrees,

The surviving crew members were transferred to the rescue vessels and they reported that the boatswain, a sailor, and a trainee were missing. A search of the tanker and the surrounding area revealed no sign of the three leading the authorities to conclude that they had been killed in the blast.

Because the vessel was operating in the disputed area of the Ukraine and Russia there were initial fears of sabotage. The Russian Marine Rescue Service, however, reported that it believes the cause of the explosion was vapors in the empty tanks. The Moscow Interregional Investigation Department, however, now reports that it is exploring criminal charges under the Criminal Code of the Russian Federation, which makes violation of fire safety requirements a crime when it results in the death of two or more people.

A sea tug dispatched to the scene towed the damaged tanker to a nearby anchorage so that inspectors could board the ship and divers were sent to inspect the hull for damage. The survey determined that the damage was all above the waterline and that the tanker could be safely towed to port. Two Russian tugs are towing the tanker to Port Krym, a port in Crimea on the western shore of Kerch Strait.