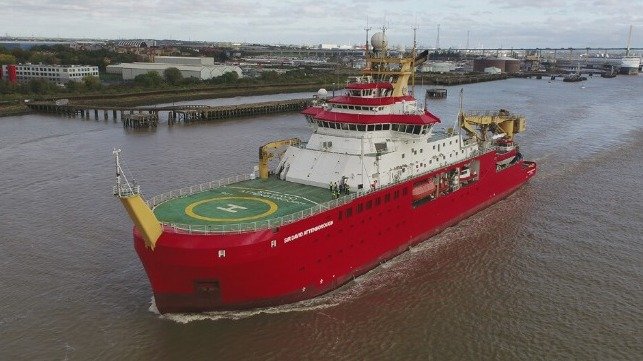 A year after her delivery and several delays during her construction, Britain’s new polar research ship, the RRS Sir David Attenborough, is beginning her first research trip to the Antarctic. Costing more than £200 million ($268 million), the program to build the new research vessel represents the U.K. Government‘s largest investment in polar science since the 1980s.

The vessel departed Harwich today, November 16, with 66 crew and personnel on board and is proceeding to Portsmouth where during a brief stop she will take on fuel. The departure from the U.K. is scheduled for November 18 to begin a three-and-a-half-week voyage to Stanley, the capital of the Falkland Islands. From there, the RRS Sir David Attenborough will continue its voyage to Antarctica and she is not due to return to the U.K. till June 2022, at the end of the Antarctic season.

“We are so excited to be waving off the RRS Sir David Attenborough on its first Antarctic mission. This historic moment marks the next chapter of ship-borne research for British Antarctic Survey,” said Professor Dame Jane Francis, Director of British Antarctic Survey which operates the vessel for the Natural Environment Research Council, which commissioned the vessel. “I was there when the first piece of steel was laid, so to watch the ship sail away to Antarctica for the first time is an incredibly poignant and emotional moment for me, and for all those who have been involved in the ship’s story so far.”

During its first mission, the state-of-the-art research vessel will transfer station teams, food, cargo, and fuel to British Antarctic Survey’s five research stations. Robotic instruments that drift with the Southern Ocean currents (Argo floats) will be deployed as part of an international oceanography program.

The ship will also transport essential science equipment to support the International Thwaites Glacier Project, a collaboration between U.K. and U.S. scientists to investigate one of the most unstable glaciers in Antarctica.

The new vessel was built by Cammell Laird. It was launched in 2018 and experienced delays during the fitting out before being handed over in November 2020. In the spring, the vessel suffered an accident while launching one of its lifeboats that injured two crew members and she then returned to the shipyard for some alterations and additional work.  After the technical fixes and refinements identified during the first round of trials, as well as commissioning new scientific equipment, the Attenborough returned to sea in July 2021 for her next round of trials and crew training. BAS has been alternating two crew aboard the ship to give each the maximum amount of time to become familiar with her operations before the official maiden voyage. At the end of October, she made a special three-day visit to Greenwich, England for a three-day pre-COP26 event in partnership with the National Maritime Museum and her last official event before the maiden voyage departed.

The RRS Sir David Attenborough replaces two older research vessels that BAS has now retired. After 30 years of service, the RRS James Clark Ross was sold in August 2021 to the Ukrainian National Antarctic Scientific Centre. The RRS Ernest Shackleton was returned to its owners in 2019, after 20 years of polar duties.

The new vessel was designed to support science in extreme environments. A wide range of specialist scientific facilities, instruments, and laboratories will enable scientists to conduct multi-disciplinary sciences to study the ocean, seafloor, ice, and atmosphere. Marine robotics and remotely operated vehicles – including the famous Boaty McBoatface, the name selected by the British public for the vessel, – will capture data from the deep ocean and previously inaccessible locations under the ice. She is also the first British polar research ship to feature a moon pool – a vertical shaft running through the vessel, open to both the air and sea.

After her return to the U.K. in June 2022, plans call for her to spend the northern summer supporting Arctic research cruises before her return to Antarctica late in 2022.