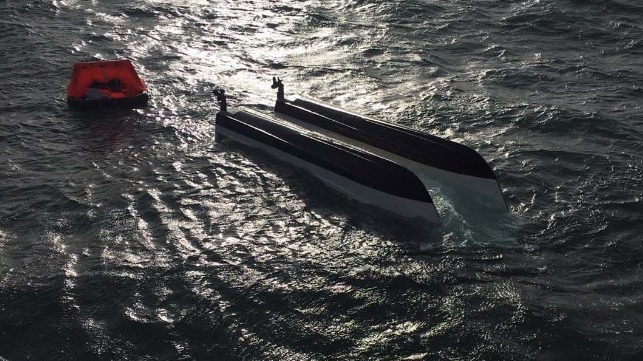 On Tuesday morning, the crew of the Royal Navy frigate HMS Westminster saved a father and his son from a capsized fishing boat off Weymouth, arriving and completing the rescue within minutes.

At about 0800 hours, the frigate received a mayday from the crew of the fishing vessel Ocean Echo, which had capsized in heavy seas about three miles off Portland Bill. HMS Westminster got up to speed and made up the five-mile distance in about fifteen minutes. On arrival, her bridge team spotted the 40-year-old skipper and his 17-year-old son, who were waving flares.

The warship put one of her boats in the water to rescue them. The crew of the boat – Leading Seaman Cameron Evans and Able Seamen Leah Mears and Kai Turner – found the Ocean Echo’s two sailors had boarded a life raft. After a quick medical check, Westminster’s sailors passed the survivors over to the crew of the Weymouth RNLI lifeboat for transfer to shore.

One of the fishermen had sustained a head injury in the capsizing, and after receiving him from Westminster’s crew, the Weymouth lifeboat crew decided to transfer him to an HM Coastguard helicopter on scene. He was airlifted from the lifeboat and transferred to a hospital in Dorchester. The other survivor was taken back to Weymouth lifeboat station, where he was transferred into the care of the local ambulance service. The capsized Ocean Echo was towed to safety.

“The swift actions of HMS Westminster enabled a good outcome for the casualties,” said Commander Lou Ray, the frigate’s Commanding Officer. “This is exactly the sort of reactive incident that the Royal Navy is able to conduct at short notice.”

Westminster had just departed Portsmouth on Monday evening after concluding a two-month maintenance period, including the installation of a new diesel engine. The latter proved useful in Tuesday’s rescue, according to her crew.