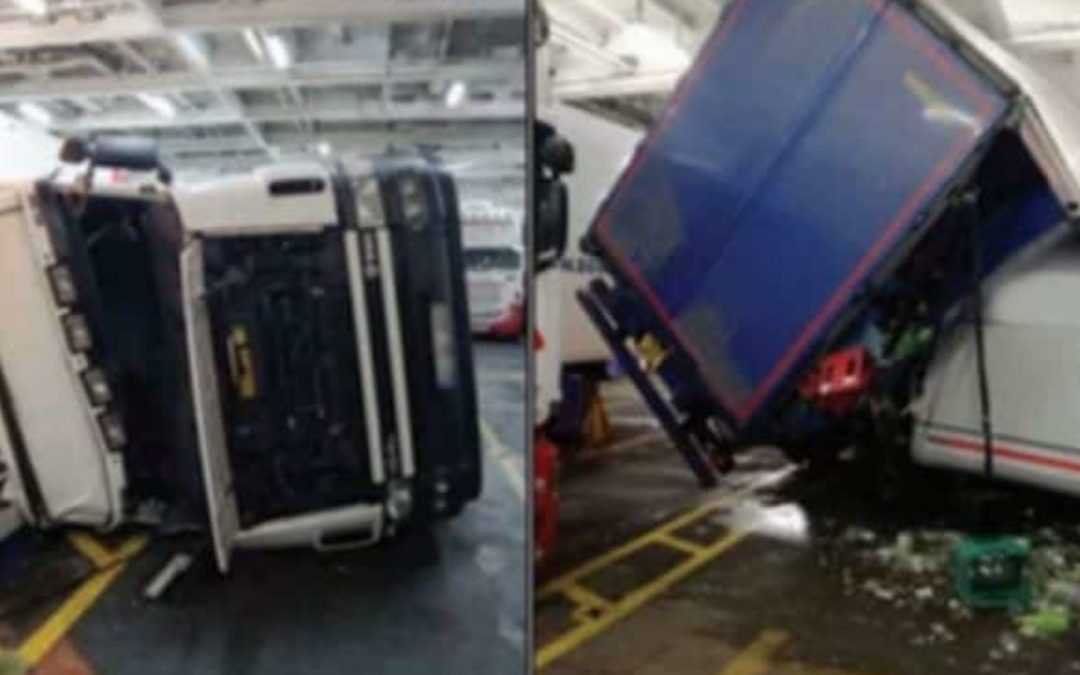 A shortsea ro-ro passenger and freight service operated up to seven sailings per day with a crossing time of about two hours. The ship’s deck crew were split into a day shift, which was led by the day Master, and a night shift led by the night Master. In the evening, the day Master sent an email to all ship departments warning of a forecast of heavy weather that night and the following morning.

All loose gear was to be secured prior to the ship’s scheduled departure at 20.20. The deteriorating weather conditions meant the vessel arrived at its destination 55 minutes behind schedule. The next departure was postponed due to the prevailing weather conditions, which were close to the company’s limits for entering and leaving the ports.

During the cargo loading operations the Master discussed the lashing requirements with his loading officer. It was decided to lash the freight vehicles parked at the fore and aft ends of each vehicle lane and all unaccompanied semi-trailers with two lashings (one either side).

At 05.15, loading was completed with 40 accompanied freight vehicles (mainly articulated vehicles) and 46 other vehicles. When the vessel sailed, the wind was close to the company’s limits for departing port and the Master experienced some difficulty manoeuvring the ship’s bow through the wind.

Once in open water the ship’s stabilisers were deployed, the autopilot set to the ship’s standard planned course of 073° and the ship was brought up to its full sea speed of 21 knots.

Soon after leaving port the vessel experienced several large rolls. The wind was blowing between 40 and 50 knots gusting to 60 knots; the waves were very large from the same direction, causing the ship to roll and yaw. Following a discussion with the Master, the OOW altered course to port and brought the ship on to a course of 055° with the aim of easing the motion.

A few minutes later the OOW altered course to starboard and brought the ship on to a course of 060°. A little later the vessel rolled 20° to starboard, then yawed violently to starboard, achieving a rate of turn in excess of 100° per minute. The ship then took a larger roll to port of just over 30°. During the 30° roll several of the freight vehicles and unaccompanied semi-trailers on the vehicle decks moved and some toppled over.

In the engine room, a lubricating oil low-level trip activated on one of the ship’s four main engines, causing it to shut down. The OOW altered the ship’s heading to 057° and very quickly the Master arrived on the bridge, followed shortly afterwards by the chief officer and the day Master.

The OOW briefed the Master while the chief officer used the ship’s CCTV system to assess the condition of the cargo on the vehicle decks. The chief officer saw that several vehicles had toppled over and informed the Master. The ship was placed into handsteering and brought round to starboard to a course of 085°. The OOW handed the con to the Master and went to assist on the vehicle deck. Within 90 minutes the vessel had been brought to shelter and docked.

The official report found that among other things: