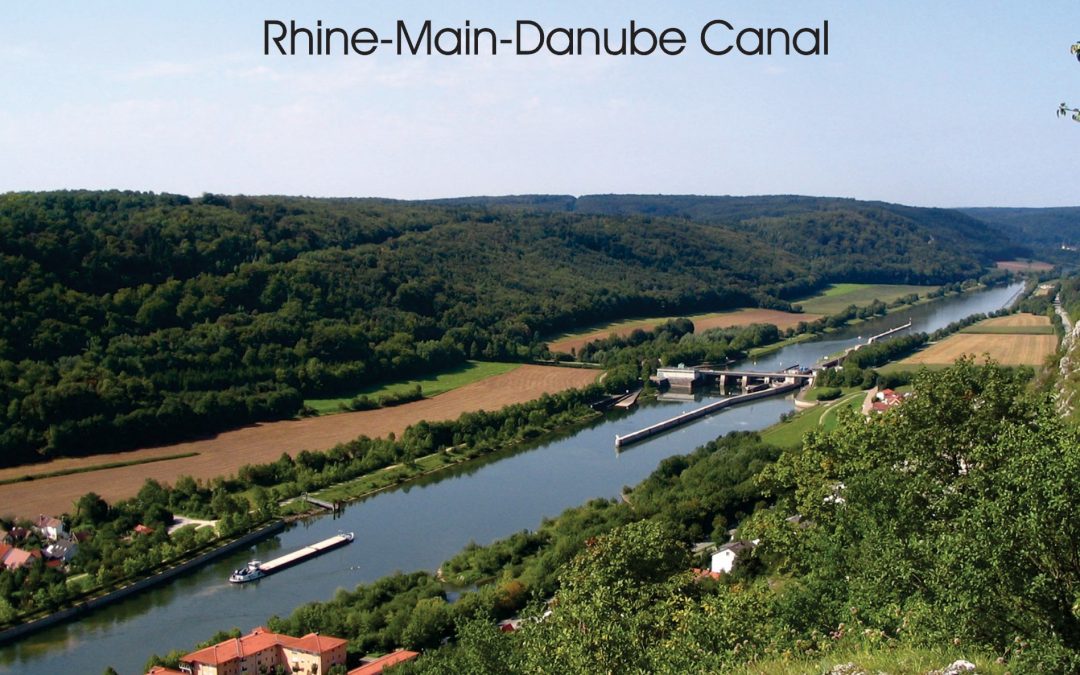 Rhine-Main-Danube Canal, also called Europa Canal, runs between the German towns of Bamburg and Kelheim via the historic city of Nuremberg. The canal is 171 km (106 miles) long and runs from Bamberg on the Main River (a tributary of the Rhine River) to Kelheim on the Danube River, permitting traffic to flow between the North Sea and the Black Sea. It thus creates a 3,500-km waterway that runs through 15 countries and can accommodate barges carrying up to 2,425 tons of bulk cargo. The canal is one of the largest civil engineering projects ever undertaken, has a total of 16 locks, each about 190 metres (625 feet) long, 12 metres (40 feet) wide, and up to 30 metres (100 feet) deep. It reaches a height of more than 406 metres (1,332 feet).

The idea for the canal to be constructed dates back to 793, when Charlemagne or Charles I, King of The Franks, wished to open a route through the centre of Europe for his battle fleet and had a channel excavated between two rivers in Bavaria—the Altmühl, a tributary of the Danube, and the Schwäbische Rezat, a tributary of the Main. Heavy rains caused the banks of the channel to collapse and the project was abandoned. In 1837, under Ludwig I of Bavaria, work began on the canal between Bamberg and Kelheim, following much the same route as the modern canal.

In 1921 the German government and the state of Bavaria formed a company to build the much larger Main-Danube Canal. Before World War II the company enlarged the locks on the Main River, many locks also having hydroelectric power stations were installed. But heavy damage was sustained by the canal due to war and the locks were destroyed. To complicate matters, bridges had been destroyed and waterways were clogged, making resumption of river traffic at the end of World War very difficult. By the early 1950’s, plans for reconstruction of the canal were no longer a priority, and the idea was shelved.

A decade later it was obvious that there was a need for a waterway that would unite the rivers; Rhine, Main and Danube, due to the increase in passenger and freight traffic. They also thought that the canal would serve as a sign of German unity. Rather than simply reconstructing the locks, plans were made to construct a strong system of locks allowing ships to travel uninterrupted from Amsterdam to the Black Sea. By the time the last section was completed in 1992, the canal had grown to span a distance of 171 kilometers (106 miles).

The canal however rises and falls with the surrounding landscape and because of the extreme height differences between the two rivers, a total of 16 locks had to be constructed to alternately lift and lower ships along their journey. At their highest point along the Continental Divide, locks carry ships to a height of 406 meters above sea level. There are some locks that can hold two or more ships at a time, while others are so narrow that simply admitting one ship is a challenge.

When ships sail into the lock, they move into position and idle their engines. The doors to the lock are shut electronically slowly, the turbulence increases as water is either admitted into or pumped out of the lock chamber. Floating guides on tracks run within the concrete walls of the lock, guiding the ship up and down, and squealing in protest as the volume of water in the lock changes. Depending on the height and volume of water, ships can spend as much as half an hour in transit within a lock.

Each year, the canal records an average of 6.7 million tonnes of goods – almost 9 million tonnes at peak level. The channel is part of the European waterway network, particularly for the transport of bulk goods such as food and feed (28%), fertilizers (16%), agricultural and forestry products (15%), and iron, steel, and other metals (12%). The canal not only benefits the transport industry, but also tourism. The artificial waterway contributes to the boom of river cruises on the Rhine and the Danube. In the year 2010, 657 passenger cabin passages were counted on the canal, nearly twice as many were counted in 2016 with 1,272.

Also, the creation of the Main-Danube Canal has had some unintended consequences, though. Several different species of marine life have spread from the Danube to the Main and vice versa for the first time, changing the ecosystem of the waterway forever.