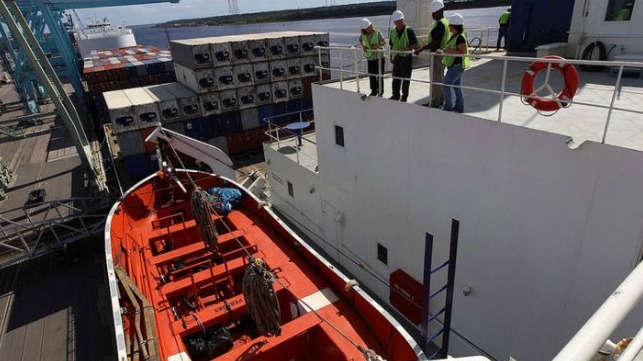 On 1st October, Thursday marks the fifth anniversary of the loss of the con/ro El Faro, which went down with all hands during Hurricane Joaquin on October 1, 2015.

While SS El Faro was under way on its normal service from Jacksonville to San Juan, Puerto Rico, she navigated into the path of the approaching hurricane. She took on water in a cargo hold and developed a list, leading to loss of lube oil suction for her steam turbine and loss of propulsion. Progressive flooding reduced her stability, and within a matter of hours she sank. 33 people aboard were killed, including 28 American mariners and a riding gang of five Polish nationals.

After a lengthy investigation, the National Transportation Safety Board concluded that the accident was attributable to the master’s decision to maintain course, the vessel operator’s “weak” safety culture and a poor implementation of Bridge Resource Management (BRM) principles. NTSB also noted several design standards that may have contributed to the sinking, including the maximum angle of inclination before the vessel would lose lube oil suction.

“Today, we remain comforted by the certainty that the El Faro officer and crew complement worked as one against terrible odds, and that they did so with focus, not fear, each faithful to the traditions of courage and character that have distinguished American merchant mariners in all economic and defense services since the Revolution,” wrote the American Maritime Officers (AMO) in a tribute. “Today, we hold warm thoughts for the survivors of these El Faro mariners – parents, spouses, children and fiancées.”

SS El Faro’s legacy can be seen today in a significant shift in U.S. Coast Guard compliance measures. After the casualty, the Coast Guard reviewed the inspection records of the El Faro and her sister ship, the El Yunque. Motivated by the findings in these records, the agency carried out intensive inspections of 53 vessels enrolled in the Alternate Compliance Program, which allows shipowners to use the services of a class society to conduct statutory inspections. The Coast Guard’s inspectors found 660 deficiences (including 86 detainable deficiencies) aboard this subset of ACP ships, and they revoked the Certificate of Inspection (COI) for six vessels.

To address this deficiency pattern and prevent its recurrence, the Coast Guard stood up a new Flag State Control Division at its Washington headquarters to oversee third party organization (TPO) performance. It has also revised the training for its marine inspectors on how to review TPO survey quality.

“On October 1, 2015, the SS El Faro and her 33 crewmembers were lost at sea. One of the causal factors that led to this tragedy was the failure of the Coast Guard to provide effective oversight of TPOs performing statutory functions on our behalf under the Alternate Compliance Program,” wrote Rear Adm. John P. Nadeau, Assistant Commandant for Prevention Policy, in an order last year. “Significant progress has been made to improve the policy framework and reform Coast Guard oversight of TPOs . . . it is critical that [Coast Guard marine inspectors] embrace and drive these changes and improvements down to the deck plates.”

In its final report, NTSB also called for the replacement of all remaining open lifeboats in the U.S. fleet. Though compliant, El Faro’s open lifeboats would have been of little use in the prevailing conditions, NTSB determined. In line with this recommendation, the Coast Guard conducted a concentrated inspection campaign to evaluate every open lifeboat left in the fleet in 2018-19. Though some deficiencies were found, the USCG does not plan to require an upgrade to enclosed lifeboats across all older vessels.