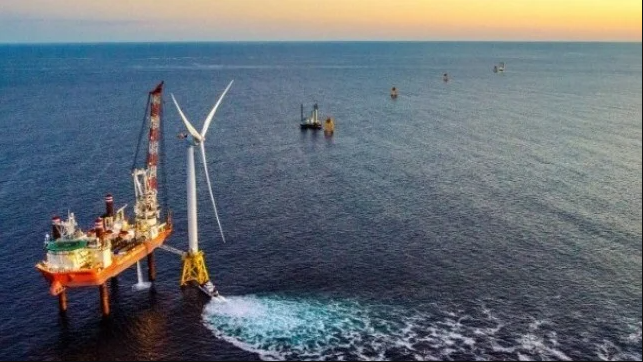 On Sunday, Senate Democrats passed a large-scale budget reconciliation package on a party-line vote, enacting many (but far from all) of the Biden administration’s climate policy priorities. The bill – which was recently rebranded as the Inflation Reduction Act – represents a compromise between the party’s leadership and Senator Joe Manchin III (D-WV), who  negotiated reductions of about 75 percent reduction of the White House’s original proposal.

Through a combination of tax hikes on business, reforms to prescription drug pricing and a new fee on methane emissions, the Act will capture an estimated $790 billion for the federal balance sheet through 2031. It will pay out an estimated $485 billion on climate, energy, infrastructure and health care initiatives over the same period – including substantial incentives for the development of offshore wind capacity.

The most impactful measure for offshore wind might be an extension of an existing investment tax credit of 30 percent, which was set to expire in 2025. The Act keeps that credit going forward and supplements it with a broad array of supportive tax measures, like extra deductions for US-made content utilization and worker apprenticeship programs.

The Act also introduces an “advanced manufacturing production credit” for a range of American renewable-energy manufacturing, including offshore wind shipbuilding. Yards like Keppel’s Texas branch will now be able to deduct 10 percent of the sale price of the vessel. The list includes similar subsidies for the production costs of critical minerals, nacelles, tower foundations, inverters, batteries, and other key ingredients in the offshore wind supply chain.

“This unprecedented investment in clean energy will supercharge America’s clean energy economy and keep the United States within striking distance of our climate goals,” said Heather Zichal, CEO of American Clean Power, the lobby group for solar, onshore and offshore wind. “The IRA will lower consumer costs, enhance grid reliability, and strengthen the nation’s energy security. It will expand our domestic manufacturing base, inject nearly half a trillion dollars into U.S. GDP over the next decade and create more than half a million new jobs – more than doubling today’s clean energy workforce.”

The Act also opens up the geography of leasing activity. It allows the Department of Interior to resume wind lease sales off the southern Atlantic seaboard, overriding an executive order issued in 2020. It also expands OCSLA to cover U.S. overseas territories for the first time, and it instructs the Department of the Interior to start evaluating lease opportunities off Puerto Rico, Guam, American Samoa, the USVI and the Northern Mariana Islands.

In good news for the oil and gas sector, the final version of the Act ties offshore wind leasing to offshore oil leasing. It requires the federal government to offer oil E&P leases on at least 60 million acres of the continental shelf in the year prior to any offshore wind lease sale. For scale, the Biden administration’s last offshore oil and gas lease sale came in at about 80 million acres.

The budget reconciliation bill also includes $3 billion in grant money to install electrified equipment and reduce emission at seaports, which the American Association of Port Authorities hailed as “enormous win for the American port industry and U.S. supply chains.”

“The creation of a federal grant program to reduce emissions and electrify ports demonstrates the federal government’s unprecedented attention to port infrastructure needs,” AAPA said in a statement. “This federal grant program will signal to equipment manufacturers and private investors that this electrification technology at ports will be ubiquitous in the coming years.”

The bill goes next to the House, which is expected to pass it as early as this coming week, and then to the president’s desk for a near-certain signature.