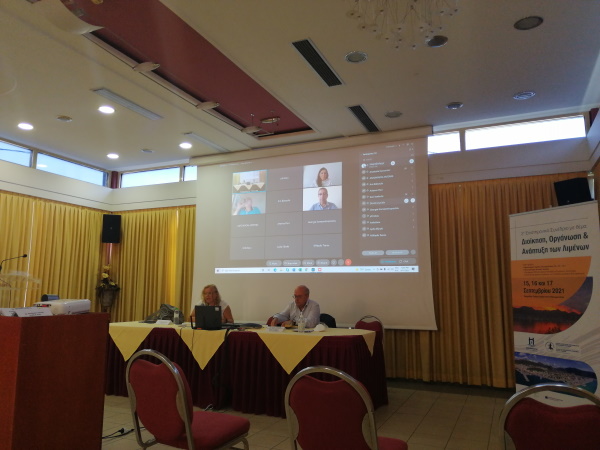 Within the context of the 2nd Scientific Conference on Port Management, Organization and Development (PDMO 2021), the European Programme Poseidon Med II organized a panel discussion entitled ‘Environment and Energy in the Eastern Mediterranean’. The panel focused on the significant benefits that the port of Igoumenitsa gains from its shift to Liquefied Natural Gas (LNG), including operational, financial, environmental, as well as long-term strategic benefits related to employment, competitiveness and sustainability. Participants called all competent bodies to cooperate with one another to address a number of technical and legislative aspects so as to accelerate the realization of LNG Infrastructure and contribute to upgrading the port of Igoumenitsa and its emergence as a critical pathway on the new energy map of Eastern Mediterranean.

In particular, during the discussion, Dr. Christos Solomonidis of ROGAN & Associates SA, who also moderated the panel, presented the design roadmap of the Small-Scale LNG infrastructure. Dr. Solomonidis brought up issues relating to the selection of the optimum location for the LNG bunkering infrastructure and presented the results of a series of technical and environmental studies implemented under the PMEDII project.

Particular emphasis was given to the legislative framework. Anastasia Kouvertari from Lloyd’s Register briefly presented the regulatory framework for LNG bunkering having as reference the relevant Presidential Decree (64/2019) issued by the Hellenic Republic, as well as the main pillars of the Port Manuals that were developed in the framework of the Poseidon Med II, which include practical and guiding principles for ship’s bunkering as well as a specialized training development framework for the personnel involved in bunkering operations.

Professor Dimitrios Lyridis from the National Technical University of Athens (NTUA) referred to the importance of comprehensive improvements of the energy hubs (where production, conversion, storage and consumption of different energy carriers is done) and methods to achieve this. Responding to the challenges arising from the new EU regulations and policies on carbon-related pollutants, the Professor referred to the development of ports as energy hubs, highlighting the range of their activities related to the operation of the network, storage and energy trading, with the assistance of Renewable Energy Sources (RES). Along the same lines was the presentation of Professor Vassilios Tselentis, from the University of Piraeus, who presented the concept of ‘Smart Ports’.

The University of West Attica and the Igoumenitsa Port Authority organised the 2nd Scientific Conference on Port Administration, Organization and Development (PDMO 2021), on 15, 16 and 17 September 2021 at ANGELIKA PALLAS HOTEL in Igoumenitsa.

The sole responsibility of this publication lies with the author. The European Union is not responsible for any use that may be made of the information contained therein.