Port of Trois-Rivières to Expand By 50 Percent 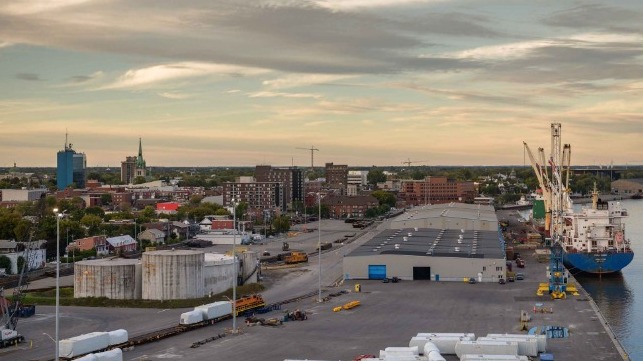 The Canadian government is investing $25 million in new terminal infrastructure at the Port of Trois-Rivières, a small bulk and breakbulk port midway between Montreal and Quebec City on the St. Lawrence Seaway.

The investment will support the construction of a 25-acre multipurpose terminal to the west of the port’s existing infrastructure. The new development – Terminal 21 – will be used for the transhipment of dry bulk, liquid bulk and general cargo. The project includes the construction of a wharf and road and rail accesss roads, as well as storage space. It will add 2,300 linear feet of wharf berthing space, and it is expected to increase the port’s throughput capacity by 50 percent.

The government funding package will cover about a quarter of the $100 million total cost for the Terminal 21 project.

“[This] announcement comes in a context where we need to create the conditions for economic recovery. Terminal 21 will increase port traffic by 1.5 million metric tons with an estimated value of [$2 billion]. But a wharf, a terminal, is more than just an infrastructure. It represents above all several generations of employed men and women who will succeed one another. This is the largest expansion phase that the Port will experience in nearly one hundred years and is the foundation for its future development,” said Gaétan Boivin, President and CEO of the Port of Trois-Rivières.

The new economic activity in Canada’s most densely-populated trade corridor will benefit the post-coronavirus recovery. Quebec lost about 820,000 jobs during the first months of the COVID-19 pandemic, and while it has since regained about 85 percent of the decline, its unemployment rate still remains higher than last year at about 7.5 percent.