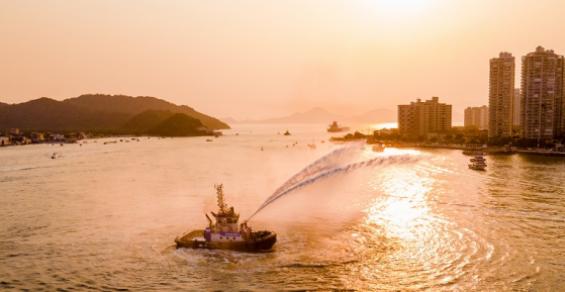 The Santos Port Authority (SPA), Wilson Sons and DockTech have signed a technical co-operation agreement for the improvement and use of pioneering seabed monitoring technology.

The three companies will aim at studying and collaborating to improve real-time monitoring of the operational depth of the navigation channel and access to docking berths at the Port of Santos, using Wilson Sons’ tugboats.

Developed by the Israeli start-up DockTech, the solution maps the navigation channel depth in real time and can understand the silting pattern of ports, predicting how seabed variations affect navigation safety and cargo transportation.

DockTech’s digital twin technology uses bathymetric data (depth measurement) collected by Wilson Sons’ tugboats to create a dynamic virtual representation of the Port’s seabed. By analysing this data with artificial intelligence-based algorithms it is possible to identify the occurrence of silting, anticipate dredging needs and ensure greater safety to navigation.

Santos Port Authority CEO, Fernando Biral, said the initiative is part of SPA’s strategy to join forces to find standards and similarities in services, enabling information sharing to rationalize investments and accelerate the innovation process in search of greater operational efficiency and put the Port of Santos on a new level of performance and technological innovation.

The collaboration with Wilson Sons and DockTech is the first initiative regulated by the SPA norm that establishes partnership guidelines for the development of technological innovations in the Port.

Wilson Sons has a minority stake in DockTech and a commercial exclusivity agreement with the company for implementation in Brazilian ports. The investment is part of the Company’s strategy to foster innovation and development of port and maritime infrastructure. The partnership will be expanded. “Having the largest port in Latin America as a strategic partner is very significant for us and an opportunity to improve the tool,” said Márcio Castro, executive director of Wilson Sons’ towage division.

Biral explains that the new technology will enable SPA to improve its planning and invest more assertively and efficiently in maintaining the depth of the Port’s navigation channel.

In addition to reducing costs, another benefit pointed out by Wilson Sons executive is the possibility of anticipating scenarios and understanding how meteo-oceanographic conditions affect the silting of the channel. “The tool feeds us with data 24 hours a day. This allows a dynamic visualization of what is happening in the port. It’s like replacing a photo with a real-time movie”, explained Márcio.