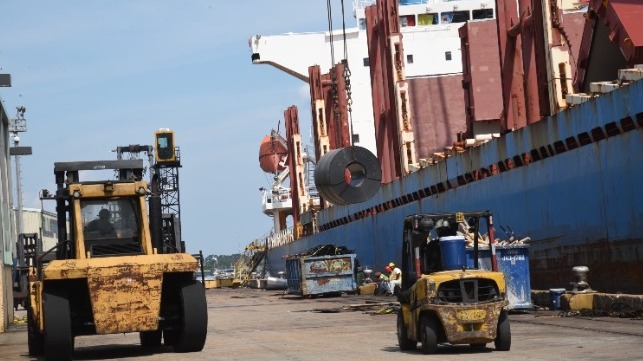 ”The State of Louisiana and our entire maritime industry are resilient. In the wake of this powerful storm, we are thankful for our essential port workers, maritime partners, as well as the federal, state, and local partners who worked tirelessly to get the Port NOLA gateway up and running,” said Brandy D. Christian, the president and CEO of Port NOLA. “Nationally, Port NOLA supports nearly 120,000 jobs and generates an economic impact of nearly $30 billion. Our focus has been to resume operations quickly and safely.”

With the U.S. Coast Guard, Corps of Engineers and Coast Survey hard at work on damage assessment, the last remaining bottlenecks on the water appear to be clearing. The entirety of the Lower Mississippi River has been reopened to navigation, including a stretch west of New Orleans that was shut for days due to a downed high tension powerline. On Monday, the Captain of the Port lifted restrictions on nighttime navigation between the mouth of the river and the western edge of New Orleans (river mile marker 114), opening up 24-hour access for deep draft vessels. Navigation is still restricted to daylight hours for deep draft vessels operating further upriver.

The Port of South Louisiana, which governs five terminal complexes along a 54-mile stretch of river, sustained some damage in the storm and said that it would take time to fully reopen. The port is the largest grain export handling hub in the United States, and it is critical to Midwestern agriculture. America’s farmers are gearing up for harvest season, and some are concerned that the port disruption will make it harder to get the new crop to market. “61 percent of U.S. soybean exports and 58 percent of corn exports depart from export facilities along the lower Mississippi River in the New Orleans area,” Soy Transportation Coalition director Mike Steenhoek told Transport Topics in a recent interview. “It’s certainly some kind of concern.”