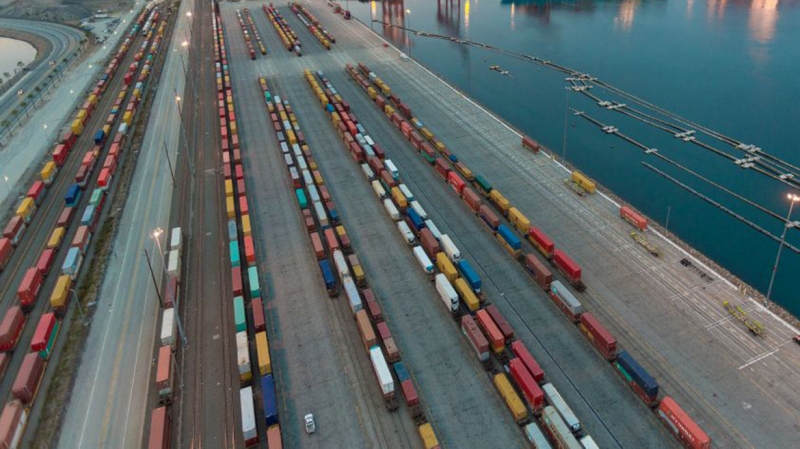 The Port of Long Beach has been awarded a $52.3 million grant from the U.S. Department of Transportation’s Maritime Administration to help fund development of the port’s “Pier B On-Dock Rail Support Facility” helping to boost on-dock rail capacity at shipping terminals.

The planned $870 million project is the centerpiece of the Port of Long Beach’s approximately $1 billion rail capital improvement program. Long Beach says the project, once the first tracks are completed in 2025, will help the port move more cargo by train, improve efficiency, and lessen environmental impacts by directly transferring containers to and from marine terminals by train, thereby reducing truck traffic as cargo volumes grow.

No cargo trucks will visit the facility. Rather, smaller train segments will be brought to the facility and joined together into a full-sized train, allowing longer trains to be assembled with greater frequency.

The project encompasses about 171 acres in the Harbor District and will require acquiring some properties in the project’s footprint. The existing Pier B rail facility serves as a storage and staging area for trains and is primarily used by Pacific Harbor Line, which provides rail dispatching and switching services.

“This is great news to hear at the end of what will be our busiest year ever,” said Port of Long Beach Executive Director Mario Cordero. “We appreciate the U.S. Department of Transportation’s support for this important project. It will help to move cargo more efficiently through the Port, getting needed products and goods to homes and businesses across America faster.”

The funding is being provided by MARAD’s Port Infrastructure Development Program, which is specifically designed for capital improvement projects at U.S. seaports.

“Our federal partners have recognized the need to modernize the Port and support our push toward 24/7 operations,” said Harbor Commission President Steven Neal. “These investments have benefits from coast to coast since cargo from the Port of Long Beach reaches every congressional district.”

Construction Pier B On-Dock Rail Support Facility is set to begin in 2023, with the first arrival, departure and storage tracks are expected to be completed in 2025, with additional tracks coming online in 2030, followed by project completion in 2032.

Additional grant funding for the project has been provided by Los Angeles County Metropolitan Transportation Authority (Metro) and the California Department of Transportation (Caltrans).