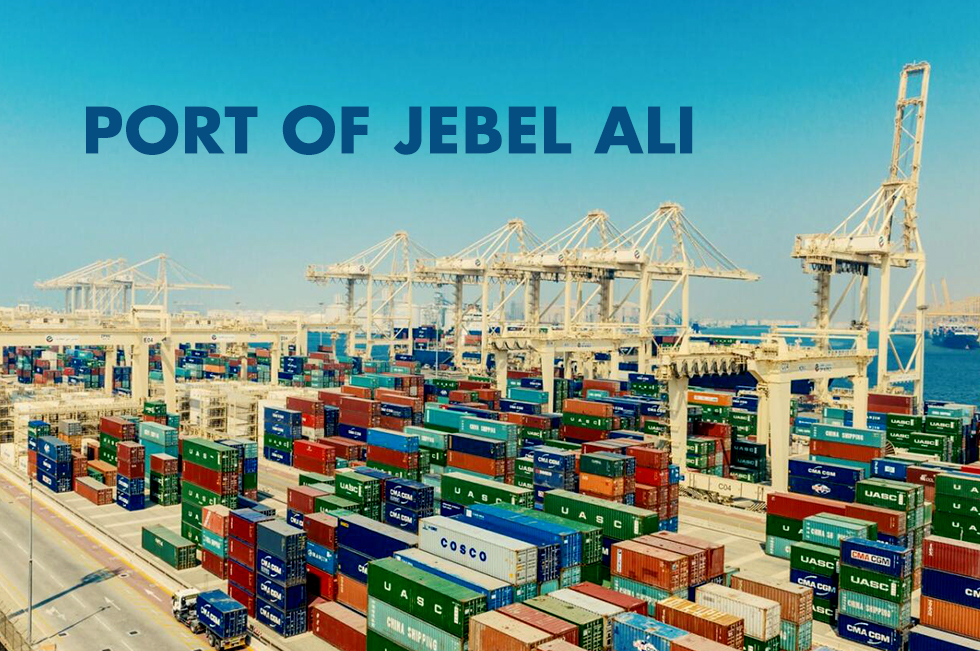 Located in the Middle East, Jebel Ali is the last on our list of major container terminals. Constructed in the late 1970s, it is the ninth busiest port and the largest man-made harbor. The port is part of the Maritime Silk Road.

Port of Jebel Ali was officially inaugurated on 26 February 1979 by Queen Elizabeth II.

The marine industry has been an important part of the gulf country. Especially, the ports in UAE have played a major role in the welfare of the country. The main sources of revenue are oil and tourism as the nation has large reserves of petroleum and natural gas which makes shipping very essential. UAE has many ports overall but the Port of Jebel Ali is the busiest among them. The Port plays a significant role in serving the Gulf, Indian Subcontinent, and African Markets.

Currently, Dubai Ports World (DPW) operates the port. It operates over 40 terminals across 22 nations and operates through 2 home terminals- the Port of Jebel Ali and Port Rashid. It has grown in size owing to aggressive mergers and acquisitions like CSX World Terminals and P&O Terminals.

Jebel Ali port is one of DP World’s flagship facilities and has handled 7.62 million TEUs in 2005, which represents a 19% increase in throughput, over 2004.

The port has 67 available berths with a size of 134.68 square kilometers (52.00 sq. mi). It also contains space for medium- and long-term general cargo storage and open storage. It encompasses over one million square meters of container yard.

Due to the depth of the port, and the size of the port facilities, a Nimitz-class aircraft carrier and several ships of the accompanying battle group can be accommodated pier-side. Due to the frequency of these port visits, semi-permanent liberty facilities (referred to by service personnel as “The Sandbox”) have been erected adjacent to the carrier berth.

The port is highly specialized in storage and all kinds of cargo at its facilities including bulk, breakbulk, and RoRos.

Container Terminal 1 (T1) has a capacity of 9 million TEU and is one of the busiest terminals. With 15 berths and 51 quay cranes, T1 has allowed Jebel Ali Port to achieve its position as one of the top ten ports globally.

Container Terminal 2 (T2) with 32 quay cranes and 8 berths has a capacity of 6.5 million TEU. Its modern technology has decreased carbon emissions by 30%.

Container Terminal 3 (T3) is known for its remarkable technological achievements. It has 5 berths and a capacity of 3.8 million TEU. T3 is one of the largest semi-automated terminals in the world equipped with 19 automated quay cranes and 50 automated rail-mounted gantry yard cranes (ARMG). It is capable of handling Ultra Large Container Vessels (ULCV) with capacities exceeding 18,000 TEU.

Container Terminal 4 (T4) is designed to serve the current and future market requirements and further world trade. On its completion, it will take the port capacity to 22.4 Million TEU.

The port has had expansion plans in place since 2001. The entire 15 stages project includes 2.4 km of new berths, the container yard behind the berths, and the supporting infrastructure and buildings necessary for a fully functioning terminal. All of this will be completed over the decade.

The port is well connected with the other transport methods like a road (Dubai’s expressway system) and air (Dubai International Airport Cargo Village).

On 9 April 2011 Port of Jebel Ali won the Golden Award for Best Seaport Overall from the Higher Committee for UAE Civil Seaports and Airports Security.