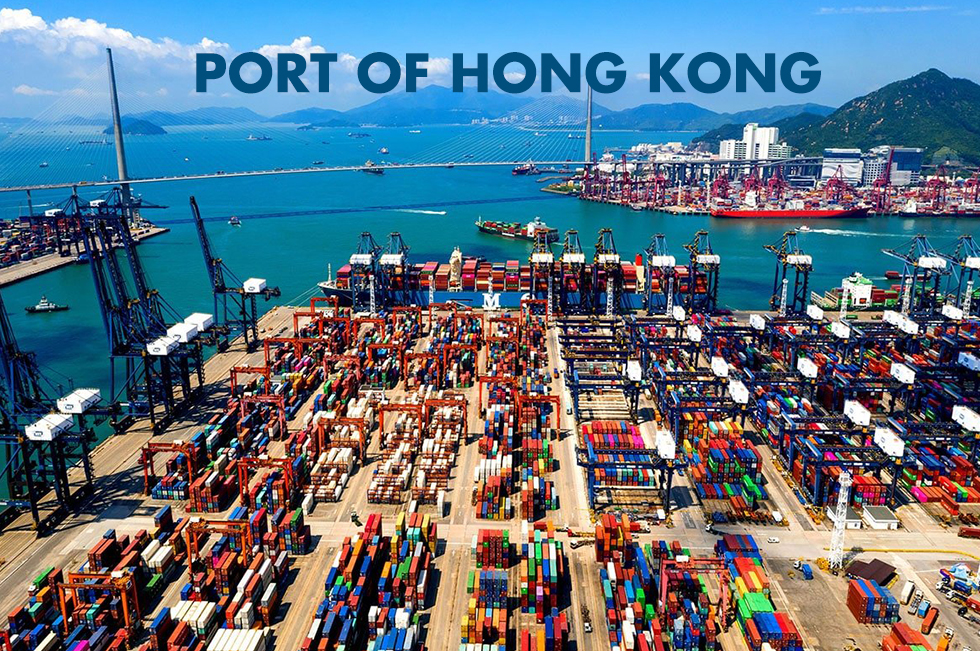 The next one on our list of major container terminals is the Port of Hong Kong, located on the Kowloon Peninsula off the South China Sea in Hong Kong. This naturally occurring deep water port provides ideal conditions for berthing and the handling of all types of vessels thereby serving as a marine gateway to the Southern part of China.

Originally, Hong Kong was just a small fishing village, but later with the introduction to trade, it developed infrastructure to boost its maritime economy. Today, the port’s feasibility and accessibility make it a famous financial and commercial hub. It has become one of the world’s largest trading entities.

The port connects to over 500 destinations worldwide and provides service to more than 280 container liners per week. Hong Kong did not have much of its own natural resources, and the Chinese Mainland provided it with a huge cargo base. Hence, it had to rely on trade, now the port is known to facilitate trade in containerised manufactured products. With a view to developing the province of Hong Kong, it focused upon its port infrastructure.

Over the past years, it has achieved a leading position with respect to its handling of marine traffic. It is currently one of the largest, busiest and most efficient international container ports in terms of handling and operating container vessels.

The average turnaround time for container vessels in Hong Kong is just about 10 hours, whereas, for conventional vessels working in mid-stream at buoys or anchorages is 42 and 52 hours respectively.

In 2016, however, 25,869 TEUs went through Hong Kong’s container port, so its top position slipped. However, in 2019, the port handled over 24 million TEUs of containers and 18 million TEUs in 2020. In comparison to 2010 operational statistics, about three percent of the increase was noted in 2019.

The port has 24 available berths and the total port land area consists of 279 hectares. The Kwai Chung-Tsing Yi basin, located in the north-western part of Victoria Harbour, is the port’s main container terminal, which comprises 9 container terminals. These account for most of the container traffic passing through the port. They are operated by 5 companies: Modern Terminals Ltd. (MTL), Hongkong International Terminals Ltd. (HIT), COSCO Information & Technology (H.K.) Ltd. (COSCO), Dubai Port International Terminals Ltd. (DPI), and Asia Container Terminals Ltd. (ACT). The port is owned by the Government of Hong Kong and operated by Hong Kong Maritime and Port Board under the administrative control of the Director of Marine.

Victoria Harbour is home to most of the port facilities of Hong Kong. Each year, an average of 220,000 ships, including both oceangoing vessels and river vessels, for both goods and passengers, visit the harbour.

Hong Kong has become the only place in the world with at-sea loading and unloading operations (Mid-stream operation). Although primarily used due to lower costs and insufficient land availability, most countries (other than Hong Kong) have abandoned this practice due to its dangers. Currently, there are 12 different yard sites where mid-stream operations occur.

International trade in Hong Kong is immensely facilitated by a strong presence of ship owners, cargo owners and traders. Over the years, a continual expansion of its maritime service cluster, comprising ship management, shipbroking, ship finance, maritime insurance and law is seen in Hong Kong.

The port of Hong Kong is a free port that allows free trade. No tariff is charged on the import or export of goods thereby making it a business-friendly port. That is another factor allowing the port to enjoy a highly privileged position as one of the world’s most engaged cargo ports.

Being blessed with deep water and a silt-free natural harbour strategically located along the major sea route, Hong Kong has been able to gain its top position. Hong Kong’s international and domestic connectivity is another factor helping its growth. Hong Kong port has set a very concrete example for the rest of the world. The nation’s and its people’s desire to set great precedents for the world made the port of Hong Kong a major transport hub in Asia.