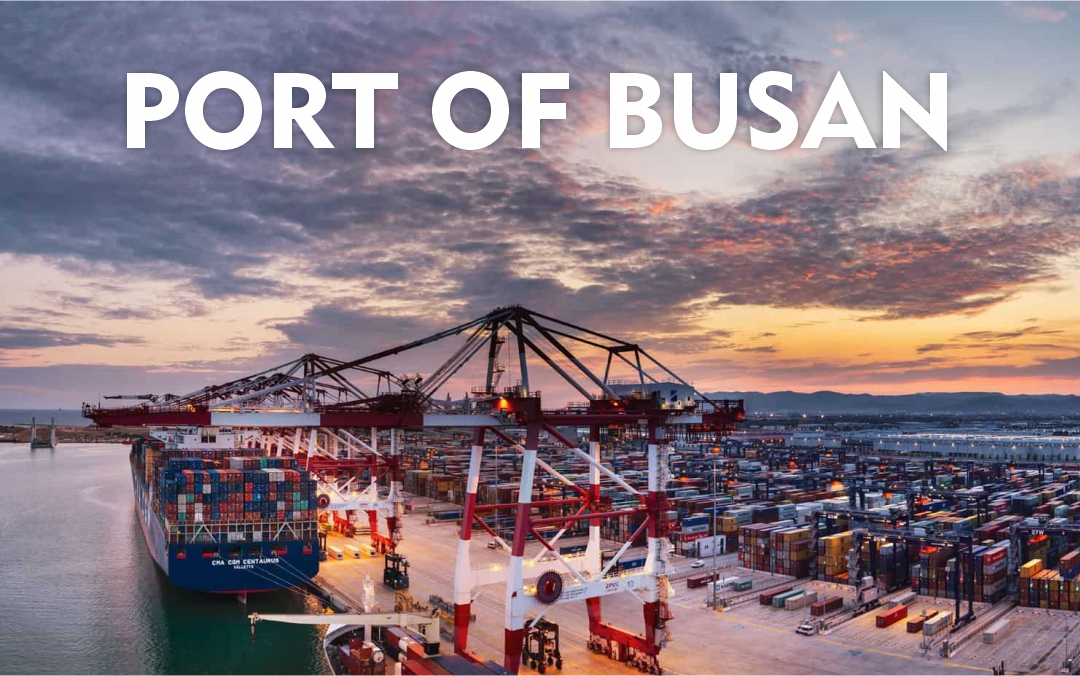 The Port of Busan is located at the mouth of the Naktong River in South Korea and was established in 1876 as a small port with strict trading between Korea, China, and Japan.

During the Korean War, North Korea did not invade some places that included Busan, which caused the refugees to migrate to Busan. The port of the city was crucial as it received war aid, raw material, and food to stabilize the country’s economy. In the 1970s, a rise in the footwear and veneer industries caused factory workers to migrate to Busan, bringing Busan’s population from 1.8 million to 3 million. The Port of Busan became a self-governing city after the end of the Korean War. The city has become home to major industries including shipbuilding, automobiles, steel, electronics, chemicals, ceramics, and paper.

Today, Port of Busan is the fifth busiest container port in the world and the largest transshipment port in northeast Asia. The port was the tenth busiest port in terms of total tonnage and the sixth busiest in terms of 20-foot TEUs of containerized cargo in 2007, as reported by the American Association of Port Authorities.

North Port provides cargo and passenger handling facilities. Opened in 1978, the International Passenger Terminal can handle both passengers and cargo. It is capable of handling 318,000t of cargo.

South Port houses Busan Cooperative Fish Market which handles 30% of the total marine volume. It is also considered the largest fishing base in Korea.

The Gamcheon Port was developed to supplement the North Port and handle increasing cargo volumes at the Port of Busan. The Gamcheon port has pier processing functions exclusively for marine products and coastal freight.

Dadaepo Port is located in the west of Busan Port and deals mainly with coastal catches. The Dadaepo port will be further developed as an environmental-friendly port.

The quay of the port can berth nine vessels.

Opened in June 1991, the Sinseondae container terminal is equipped with advanced loading/unloading equipment such as high-speed container cranes capable of handling post-Panamax container ships. The terminal is operated by Busan East Container Terminal Company Limited. The annual handling capacity of the terminal is 1,280,000TEUs.

Singamman container terminal was opened in April 2002 and is operated by Dongbu Pusan Container Terminal Company Limited (DPCT). Built over an area of 308,000m², the terminal has an annual handling capacity of 650,000TEUs.

The Coastal Ferry Terminal is operated by Dongbu Corporation Global Enterprise Limited, the Central Port has a quay length of 646m with alongside depth of 9m.

In the wake of the 9/11 attacks in the United States, the port authorities have implemented the International Ship and Port Facility Code (ISPS Code) to heighten the security of ships and port facilities.

The Port of Busan handles nearly 40% of the country’s total marine cargo, 80% of its container cargo, and 42% of national fisheries production. The port handles nearly 130 vessels every day.