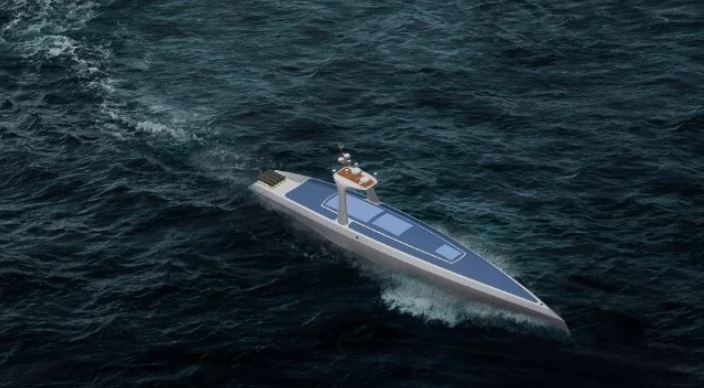 Britain’s Plymouth Marine Laboratory (PML) has unveiled the design for a long-range autonomous research vessel that it hopes will help lower the carbon impact of oceanography and advanced international marine research.

The design of Oceanus, which derives its name from the first child to be born on the original Mayflower in 1620, is supported by seed funding from the Natural Environment Research Council (NERC).

The sleek, futuristic-looking and fully unmanned Oceanus has been designed as a self-righting, light-weight, mono-hulled autonomous that will be propelled by two rear-mounted pod drive motors that will be powered by a battery bank that will in turn be charged by both a diesel-engine-driven generator and deck-integrated solar panels.

The vessel is designed primarily to make the transatlantic sampling voyage from the UK to the Falklands carrying an advanced scientific payload and will use the latest AI technology to help navigate, with real-time input from weather forecasts and other marine data feeds. Equipped with an array of monitoring sensors like cameras, multi-beam sonar and depth-sensing system, the ship will have the capability to collect data for research in critical areas such as climate change, biodiversity, fisheries and biogeochemistry.

“This is a hugely exciting venture, with the capacity to revolutionize the way we carry out marine research expeditions and support the drive towards net zero,” said Icarus Allen, PML CEO.

According to PML, the Oceanus represents a ground-breaking vision of how long-range marine research can be carried out in a more environmentally-benign way. While a fuel-efficient diesel engine will still feature, it will be complemented by on-board micro-energy generation devices and solar panels on the deck.

The command centre for the vessel will be hosted at PML and will display oceanographic conditions in near-real time, providing scientists and other users with open access to oceanographic data.

While manned on site sampling will still be needed at times to validate the autonomously collected data and to perform more complex monitoring and experiments, autonomy on this scale will allow for radically more responsive and more frequent data collection at a wider range than currently possible. This will help to plug any gaps in datasets and greatly improve marine modeling.

“The voyages of exploration the Oceanus will undertake are matched in intensity by the parallel technological voyage to bring into being a new era in climate science at lower fiscal and ecological cost,” said Brett A Phaneuf, M Subs Ltd Managing Director.

PML and M Subs believe the vessel will provide the means to carry out an unmanned Atlantic Meridional Transect (AMT), automating an annual marine research expedition along the breadth of the Atlantic Ocean that embarked on its first voyage in 1995. An autonomous AMT could lead to multiple data collection missions a year.