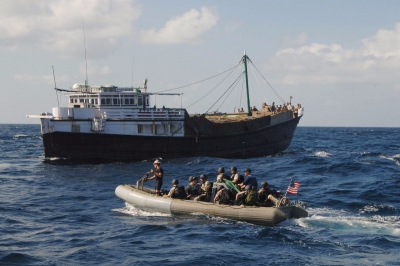 According to reports the 19,800 dwt product tanker with a crew of 21 onboard was sailing from Latvia to Delta State was boarded by nine armed pirates some 220 nm south of Lagos, Nigeria on 11 March at 15-12 hrs UTC.

The vessel had crew of 21 comprising Ukrainian, Romanian and Philippine nationals, 15 of whom were taken hostage. The nationalities of those taken hostage is not known. The Davide B is managed De Poli Shipmanagement in the Netherlands

“The area where the incident occurred has seen an increased number of incidents between the end of Q4 2020 and beginning of Q1 2021. During the same time PAGs have shown an increased interest in targeting areas frequently used as linkup/break off points for security escorts sailing through the Nigerian EEZ or calling Nigerian ports,” Praesidium International said in an alert.

“This modus operandi corroborates the hypothesis that PAGs have a thorough understanding of local Navy and private security movements as well as commercial sailing routes within the greater Nigerian EEZ area.”

Dryad Maritime said: “Vessels within this area are at a unique vulnerability in that they are generally operating within waters beyond the operational footprint of regional security forces. Within 2020 there were 5 incidents inclusive of kidnapping that occurred within 30nm of the reported incident.”