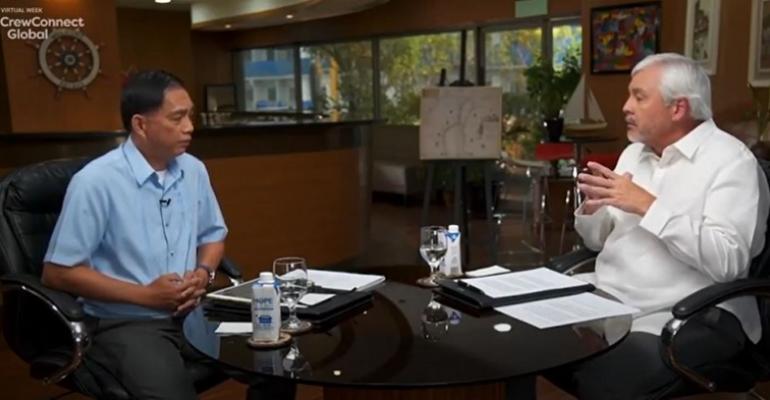 The European Maritime Safety Agency’s (EMSA) ongoing issues with Philippines seafarer training standards and the STCW Code have hung over the country’s crewing industry for a decade and half, but the Maritime Industrial Authority (Marina) is confident about a new strategic corrective action plan.

Vice Admiral Robert Empedrad, Administrator of Marina, took office 19 months ago just as the last audit by the EMSA in the Philippines was being completed and inspectors left the country narrowly before it entered lockdown for the Covid-19 pandemic. The delayed final report from this audit is still yet to be published.

Speaking to Vice Adm Empedrad at Crew Connect Global Virtual Gerardo Borromeo, CEO of PTC Group and Vice President of the Philippines Shipowners Association, described EMSA issue as a shadow over the Philippines maritime industries. The shadow Borromeo alludes to is the threat of a ban on Filipino officers serving on EU-flagged ships.

Vice Adm Empedrad said that the Philippines authorities were yet to receive the EMSA report, which he expects to be a negative. Despite expecting a negative report he is upbeat that Marina and the Philippines crewing industry will soon be able to finally satisfy the requirements of EMSA with the work that has taken place over the last 19 months.

A key difference to the past he said was Marina has involved industry stakeholders in drafting a strategic corrective action plan.

“So, we are integrated our stakeholders now, we will be coming up with a primary strategic action plan, a comprehensive one which has never been done before. And this is the product of not only Marina but the entire industry,” he explained.

The Vice Adm believes EMSA report into the last audit will be negative as it does not take into the strategic corrective action plan, which the country will then have a further two months to submit.

Asked if he was confident Marina would be able to overcome the negative report Vice Adm Empedrad stated, “Yes very confident. there has never been a comprehensive report that will address EMSA.” Again, he stressed the input of stakeholders as a key change.

The Philippines is the world’s largest supplier of seafarers to the international shipping fleet, however has feced pressures over standards, legal actions brought by seafarers, and more recently Covid lockdowns and border closures.