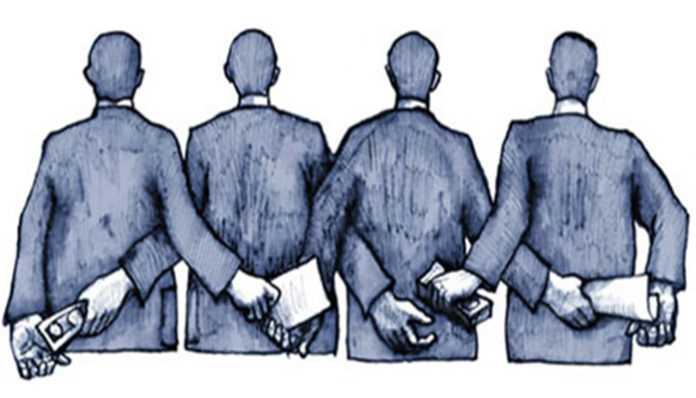 Corruption today is not only a vice but is slowly and surely becoming a way of life in every sector of our society. When an individual is appointed by the common people and given an honorable position, he/she is expected to adhere to certain rules and regulations. Oftentimes, people covet an honorable post to gain authority, get access to funds but very rarely do they have the desire to work for the people and make their lives better. Historian Baron John Acton famously declared that ‘Power tends to corrupt and absolute power corrupts absolutely.’

Time and again, we have witnessed that getting a taste of power can corrupt even honest individuals.

Soon after they take up a position they award themselves more at the expense of the people who elected them. Power and authority should be utilized for the purpose of bettering the lives of individuals and society who elected them.

Today, we live in        big apartment complexes, paying a good sum every month to the society as maintenance charges, which have shot up significantly in the past few years with the rise in the cost of maintaining premium common facilities. But is your contribution to the society fund used for your benefit or those who were elected? Because, in the name of development and maintenance of the society, the office bearers often cheat the people and flout rules to benefit and garner huge money. Corruption is more widespread in bigger apartment complex because in small apartments there is a watch on every penny spent. However, in a big complex, money is freely available for spending. More expenditure means more corruption. When a disagreement arises between the flat owners and housing society, the corrupt members often resort to harassment and threatening methods to silence any criticisms and questions.

There should be complete transparency in the functioning of the housing society. Money spent on each and every utility should be properly maintained in the books. Flat owners have the right to know where the money is being used and ensure that the office bearers of the society do not indulge in corrupt practices by misappropriating the housing fund.

One’s work should be such that it commands respect and if you take up an honorable job, don’t lose your dignity for short-term gains, because in the end it will bring shame and disgrace.

“Peace is the happy natural state of man; war is corruption and disgrace”