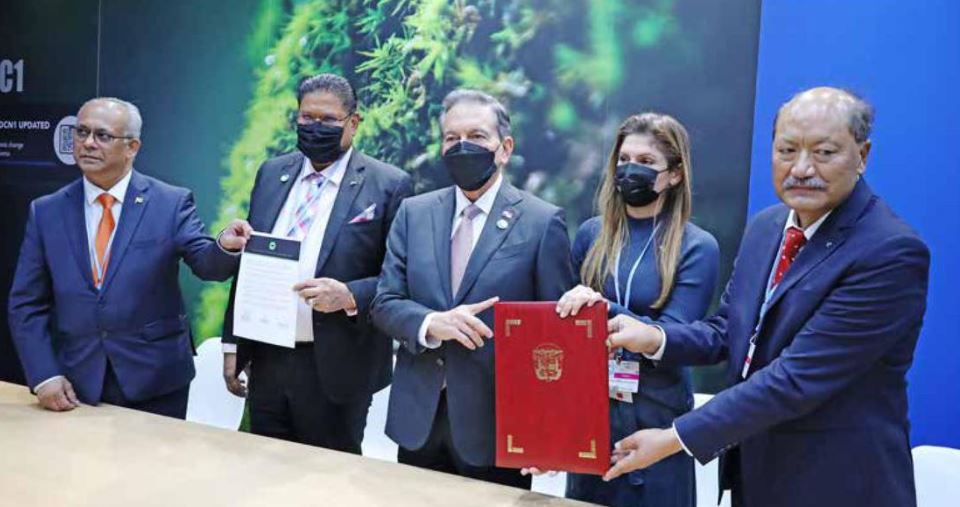 The President of the Republic Laurenlino Cortizo attended the 26th session of the Conference of the Parties (COP 26) of the United Nations Framework Convention on Climate Change (COP 26).

The Panama Ship Registry was present, through Panama’s Permanent Mission to the International Maritime Organization, and attended a series of events related to the maritime industry.

During COP 26, the Prime Minister of Denmark, Mette Frederiksen, presented the Declaration of Zero Emissions in the Maritime Industry by 2050, which commits signatories to zero emissions in shipping and to work with the IMO for adopting targets for 2030 and 2040 and achieve the industry’s decarbonization by 2050.

This declaration has been signed by 14 countries that recognize the importance of minimizing the effects of climate change. Those are: Honduras, United Kingdom, United States, Belgium, Denmark, Finland, France, Germany, Hungary, Iceland, Marshall Islands, Norway, Sweden, and Panama.

The Panamanian Registry continues promoting the construction of ships that pollute less, by offering special incentives for Eco-Ships and New Constructions. This is to reduce the economic impact of the environmental issues, for ship owners and their fleets.

Panama’s Ship Registry provides the IMO with the data collected on fuel oil consumption, in accordance with MARPOL requirements. In 2020, the Panamanian flag achieved 100% compliance in the issuance of certificates and reporting to the GISIS platform, on its fleet’s fuel consumption.

The Government of Panama has committed on the following topics:

– Declaration on management and conservation of the Tropical Pacific Marine Corridor for the conservation and management of the ecosystems included in the Eastern Tropical Pacific Marine Corridor (Cocos, Galapagos, Malpelo, Coiba).
– Agreement to reduce methane gas emissions by 30% by 2030, which Panama has signed along with 80 other countries.
– Commitment to end deforestation by 2030, where Panama is a signatory, along with 100 other countries.
– President Cortizo was Witness of Honor at the signing ceremony of the Declaration of Carbon Negative countries.
– Panama signed the Glasgow Declaration for a fair water footprint.

The International Chamber of Shipping organized the conference nshaping the future of Shipping” to address strategic points on the road to decarbonization and showcase its efforts to offer a sustainable future for the industry. The conference was attended by the countries members of the International Maritime Organization and industry representatives to discuss new technologies and alternative fuels needed to protect the environment.

During the conference, Panama presented its emissions reduction’s achievements and the important role it plays in the transition, since it has one of. the world’s main maritime routes and more than 8,000 ships under its flag.

Panama, as a Carbon Negative country, will continue its efforts for the protection and preservation of the marine environment.