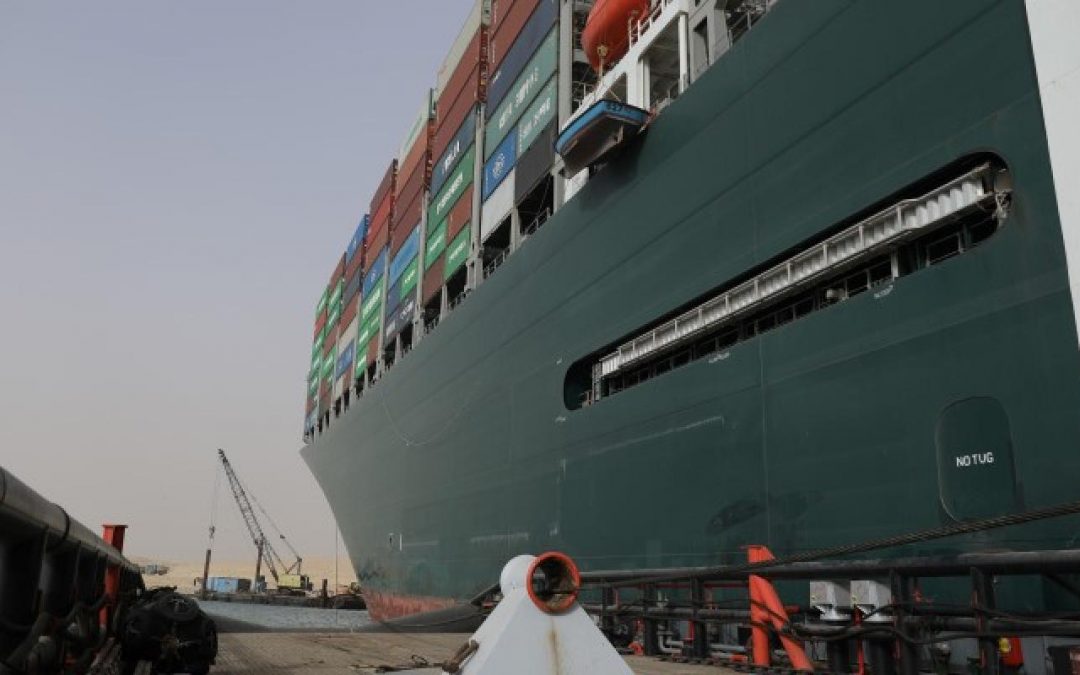 The Panama Maritime Authority (AMP) has started an investigation into the grounding of the Ever Given containership in the Suez Canal last week to determine the causes of the incident.

To remind, the 20,000 TEU containership, flagged in Panama, ran aground on March 23 blocking the waterway for hundreds of ships for six days.

The ship was finally refloated and towedto the Great Bitter Lakes region for its technical examination on March 29.

The Panama Maritime Authority said that according to preliminary reports Ever Given suffered mechanical problems that affected its maneuverability.

The ship had two pilots on board during the transit.

However, the owner of the vessel, Japanese shipping company Shoe Kisen insists that there had been no blackout resulting in loss of power prior to the ship’s grounding.

Instead, gusting winds of 30 knots and poor visibility due to a dust storm have been identified as the likely causes of the grounding, which left the boxship stuck sideways in a narrow point of the waterway.

The incident has not resulted in any marine pollution ot injuries to the crew, only some structural damage to the ship, which is yet to be determined.

“ICS expects the results of a full investigation into the incident to be made public once complete, to ensure any vital lessons are learnt,” the International Chamber of Shipping (ICS) said in a comment.

“I hope this incident will remind governments of the vital role that seafarers and shipping plays in keeping world trade moving. Seafarers must not be forgotten as soon as this incident is over.”

The shipping convoys in the canal have been resumed since as the waterway authority battles to clear out the congestion created by over 300 ships that had been waiting for days to pass through the waterway..

According to VesselsValue, around 30 percent of ships have moved from their waiting positions.

The blocking of the Suez Canal and the resulting disruption to global shipping is likely to cause a large loss event for the reinsurance industry, Fitch Ratings says.

“This event will reduce global reinsurers’ earnings but should not materially affect their credit profiles, while prices for marine reinsurance will rise further as a consequence of the container ship ‘Ever Given’ grounding in the canal,” Fitch predicts.

The ultimate losses are yet to be quantified, one of the determining factors being the lenght of the salvage operation. Fitch estimates losses may easily run into hundreds of millions of euros.

As the Ever Given was able to travel after being freed, claims related to hull and cargo insurance, including salvage (which will be borne by the shipowner’s hull insurer), should be lower.

“However, the shipowner’s protection and indemnity club will probably also face claims from the owners of the cargo on the Ever Given and of the other ships that are blocked in the Suez Canal for losses related to perishable goods and supply chain disruptions. In addition, they may face claims from the Suez Canal Authority itself for loss of revenues,” Fitch Ratings pointed out.

“A large share of those losses will probably be reinsured by a global panel of reinsurers. In isolation, this large loss event should be neutral to their credit profiles. However, it will add pressure to global reinsurers’ 1H21 earnings – earnings that have already been knocked by catastrophe events such as winter storms in the US and flooding in Australia, as well as by additional coronavirus pandemic-related losses.”