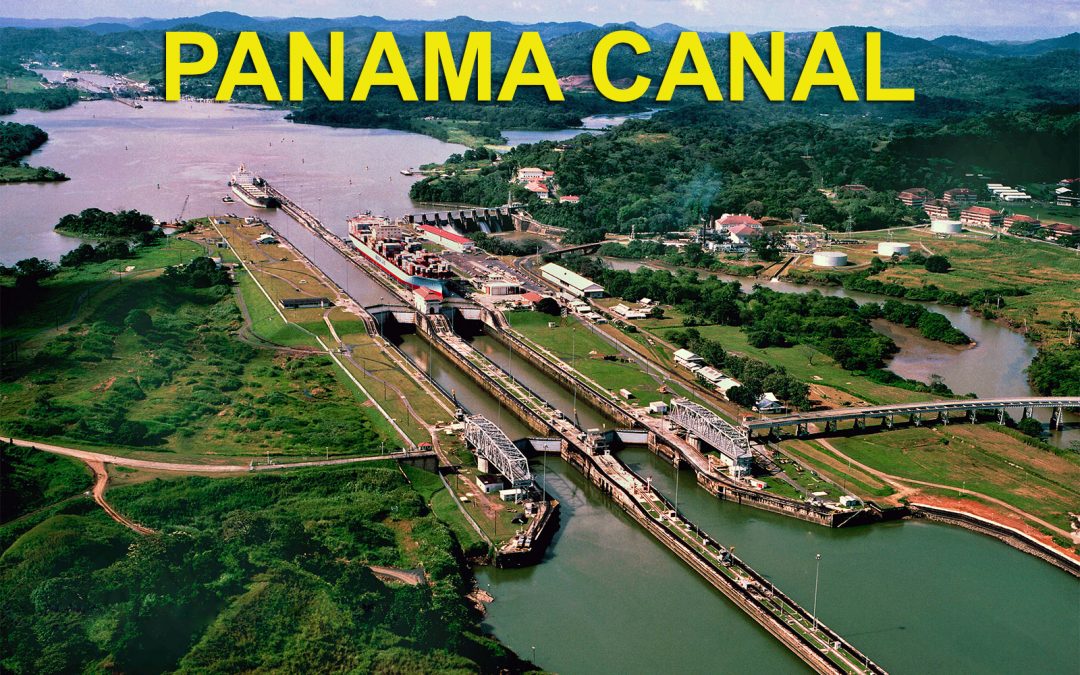 The next canal on our list is the Panama Canal, one of the most remarkable artificial waterways in the world. The strategic location of this canal in the western region offers connectivity between the Atlantic and the Pacific Ocean with the narrow Isthmus of Panama.

Originally the ships wanting to travel between the east and west coasts of the United States would have to make a strenuous trip around the Cape Horn. However, the opening of the Panama Canal in 1914 helped shorten their voyage by approximately 8,000 nautical miles (15,000 km). It takes just around 8 to 10 hours to cross the Panama Canal.

Many people dreamed of having such a connection. It is known that Ferdinand de Lesseps, who built the Suez Canal, was approached to build Panama. Multiple investors along with French Capital financed this project. Only little did Lesseps know that this dream would be a farfetched one. He realised that, unlike the Suez, the topographic conditions of Panama were immensely different. Panama was a tropical jungle with vast rains, heat and humidity, tropical diseases, coastal marshes, and massive stretches of mountain ranges. The process of cutting through these mountains would require a lot of developed machinery and was also a costly and time-consuming process.

So rather than excavating down to sea level, the engineers supposed that a technique to create an elevated canal would be the best solution. The work of the canal was started, however, due to natural calamities and tropical diseases, the construction came to a halt. Further down the line, the United States undertook the construction and inaugurated the canal on 15th August 1914, under the able leadership of Mr. John Frank Stevens and later Major George Washington Goethals as chief engineer.

Today, this 82 km-long waterway offers its service to 29 major liner services and also plays a significant role in the US economy. In 2017, the Panama Canal witnessed the arrival of a total of 13,548 vessels and received 403.8 million tons of cargo.

An astonishing feature of the Panama Canal is that the oceans that this canal connects are not at the same level. Geographically, the Pacific Ocean lies a little higher than the Atlantic Ocean with variations in the tidal levels of the oceans. The elevated canal also solves this problem.

Now you must be wondering how this actually works. Well, it is clearly a noteworthy feat of engineering, purporting to the needs of the ships to save transit-time. The canal uses Water Lock Gate System, which acts as a massive elevator for ships. In simple terms, it’s like the ship climbing the ladder from the Atlantic Ocean, and then sailing through the elevated canal, and finally climbing down towards the Pacific Ocean.

For example, once the vessel approaches towards the 1st lowest chamber of the canal locks from the Atlantic Ocean, the valves on the walls open, and water flows by force of gravity from the higher chamber to the lowest one, thereby lifting the ship and matching the water level of the 1st and 2nd chamber. The water used in this process is fed by gravity from Gatun Lake, one of the largest artificial water bodies in the world, through a system of massive culverts. These main culverts then extend under the lock chambers not only from the sidewall but also from the center wall. Each lateral culvert has a set of 5 openings that release water into the chamber.

Normally, the water locks are filled or emptied in a systematic manner in less than 10 minutes without using pumps and each pair of lock gates takes two minutes to open. Once the water level is equal on both sides, only then, the locked gate opens in a ‘V’ shape to allow the ship into the next chamber. The ship then continues ahead through the elevated channel and it’s time for it to go down towards the Pacific Ocean. Again, using the same technique, once the ship reaches the gates (towards the Pacific Ocean), valves release water into the next chamber and lower the ship at each step. After this, the water goes out to sea by gravity and the ship finally exits the lock and can continue its journey further.

For each ship transiting the Canal, about 52 million gallons of fresh water are used, which is then spilled into the ocean. Considering this, the gates are designed in such a way that they can hold and handle the force of thousands of liters of water, therefore, the size of the gates ranges from 14.33 to 24.99 meters with a wall thickness of 2.13 meter. However, Gatun lake is one of the main sources of drinking water in Panama and unfortunately, a lot of freshwaters is wasted during this process.

To address this issue, the new locks utilize the state-of-art technology wherein each chamber has a lateral “Water Saving Basin” which allows the Canal to reuse 60 percent of the water used per lockage, saving seven percent more than the existing locks do. Just like the old locks, the basins are filled and emptied by gravity, but instead of completely draining water from the Gatun lake, this lock uses water from the ‘Water Saving Basins’. This in turn reduces the volume of water that is needed in lock operation leading to less water wastage. The new lock chambers are 427 m (1,400.92 ft) long, 55 m (180.45 ft) wide, and 18.3 m (60.04 ft) deep allowing the voyage of larger ships.

The whole process is operated electrically from a control room located on the center wall of the upper flight of locks. The old gates used electric towing locomotive, called mules, whereas the new gate uses tugboats to guide and pull the vessel through the lock chambers. And unlike the old gates which used miter gates, the new locks use rolling gates. Furthermore, the allowable size of the ship is limited by the width and length of the available lock chambers, by the depth of water in the canal, and by the height of the Bridge of the Americas.

Navigating the Panama Canal can be challenging due to its narrow and steep route, e.g. the ‘Culebra Cut’ also formally known as the ‘Gaillard Cut’ is a narrow stretch of the Panama Canal that cuts through the continental divide in Panama. Further, ‘The Hydraulic Effect’ caused due to sudden gush of water and the hydrodynamic forces of current in shallow and confined waters requires skilled pilots. It is interesting to note that Panama Canal Authority (ACP) appoints few honorary pilots, generally masters, who have successfully completed 100 transits through Panama Canal. The Panama Canal Pilots’ Union is an organization representing 256 professional pilots assisting in the safe transit of vessels through the Panama Canal, still, the responsibility lies with the ship’s master and crew.

PCA carefully carries out operations and maintenance processes related to Panama Canal and majorly stresses on making the training facility better to facilitate a smooth process. It recently announced about receiving Kongsberg Digital Training Upgrade to include multiple vessels in training scenarios and extend the realism of the simulator training provided for pilots and tug masters.

All these commendable engineering innovations make Panama Canal one of the most noteworthy Engineering achievements. Now, you know why sailors consider themselves fortunate for being able to voyage through this canal. Don’t worry, even tourists can visit the canal to watch how it works and pay tribute to all the workers who died during the construction.