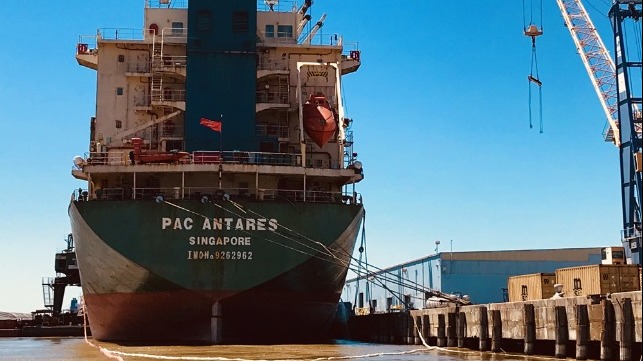 In the latest example of a shipowner and its crew knowingly concealing the discharge of oily water, Pacific Carriers Limited, based in Singapore, pleaded guilty in U.S. District Court in North Carolina. At a sentencing hearing on December 1, the company was fined $12 million and placed on probation for four years. One of the company’s chief engineers also pleaded guilty to falsifying records.

Chief Engineer, Wenguang Ye, was sentenced to a fine of $5,500 and banned from entering the United States for one year for his guilty plea. The engineer had agreed to cooperate in the investigation.

In pleading guilty, PCL admitted that crew members onboard the Pac Antares, a 20,471 gross-ton, 586-foot bulk carrier, knowingly failed to record in the vessel’s oil record book the overboard discharge of oily bilge water and oil waste. The company admitted that its crew discharged oily garbage and plastic overboard and falsified the garbage record book while also failing to use the required pollution-prevention equipment. The incidents cited in the guilty plea ranged from approximately April 2019 until the vessel arrived in Morehead City, North Carolina, on September 29, 2019.

“The defendants in this case knowingly, intentionally, and illegally discharged oily waste and other garbage into the waters along the North Carolina coast,” said United States Attorney Robert J. Higdon, Jr. in announcing the sentencing.

PCL also admitted to storing oily waste along the keel of the vessel, which constituted a hazardous condition under the Ports and Waterways Safety Act. By law, this condition should have been immediately reported to the U.S. Coast Guard Sector North Carolina.

Law enforcement first learned of the pollution offenses when a crew member walked off the ship and informed a Customs and Border Protection officer that he had information about illegal discharges that had taken place on the vessel. The Pac Antares had arrived in Morehead City, North Carolina on September 29, 2019.

The information was sent to the U.S. Coast Guard, which launched an investigation, including an inspection of the Pac Antares. Examiners discovered a configuration of drums, flexible hoses, and flanges used to bypass the vessel’s oily water separator. They also discovered that oily waste had been discharged through a laundry sink either directly overboard or through the vessel’s sewage system. This was confirmed by the discovery that the sewage system was contaminated with oil.

As the investigation continued, crew members also admitted that bags filled with oily rags were thrown over the side of the ship. These discharges were knowingly not recorded in the Pac Antares’s oil record book and garbage record book, which as required were presented to the U.S. Coast Guard during the vessel’s inspection. The examiners also found over 60,000 gallons of oily water being stored in the duct keel, which took several days and a third-party contractor to properly clean out.

“This kind of deliberate evasion of our pollution control laws will not be tolerated,” said Principal Deputy Assistant Attorney General Jonathan Brightbill of the Justice Department’s Environment and Natural Resources Division. “The Environmental Crimes Section works hand-in-hand with U.S. Attorneys Offices and law enforcement partners around the country to investigate and prosecute the intentional violation of our laws that protect our oceans by commercial ship owners, operators, and personnel.”

In addition to these incidents, the Pac Antares has been involved in several other pollution-related cases in the United States. In 2008, the vessel was involved in another prosecution in Wilmington, North Carolina, for concealing the overboard discharge of oily bilge water and assessed a $2.1 million criminal penalty.

The Pac Antares also caused a significant oil spill on the Mississippi River when on April 12, 2018, the Singapore-flagged vessel struck a wharf near New Orleans. The allision punctured one of the ship’s fuel tanks, resulting in a discharge of heavy fuel oil into the river. Approximately 10 miles of the Mississippi River were closed to facilitate cleanup of approximately 4,200 gallons of fuel.
Source: Maritime executive