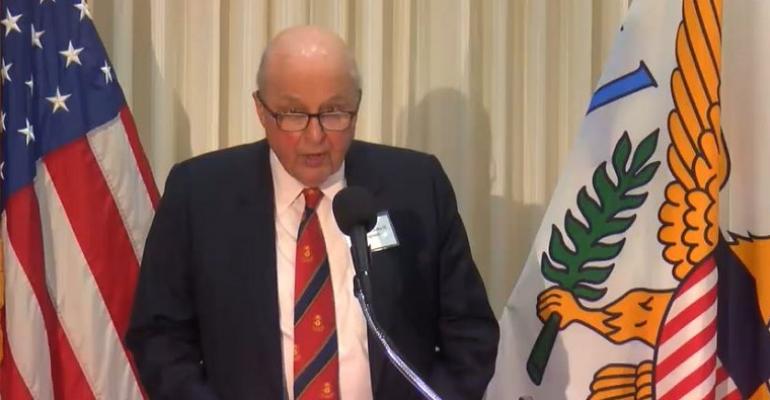 An influential group of academics and high-level national security advisors have unveiled plans for an ambitious Rocky Balboa-style fightback for the US maritime industry.

Unveiled in Washington, DC on Tuesday by former Director of National Intelligence and US ambassador to the United Nations, John Negroponte, the “Revitalization Plan for US Maritime Trade, Commerce and Strategic Competition” was developed over two years by a team of distinguished fellows at the Northeast Maritime Institute – Center for Ocean Policy and Economics (COPE) and advised by an array of leading thinkers in the maritime industry.

“The lack of US ownership not only leads to a lack of economic opportunity but also limits our ability to build a more sustainable economy,” stated Negroponte.

With global shipping tonnage set to triple by 2050, he said, the revitalisation plan was key for the US to recapture a foothold in the global commercial fleet and resolve some of the most pressing security, environmental and supply chain issues facing the country in the process.

“This plan is helping us to think about creative initiatives as we work towards a transformed global economy and how the US is going to address the challenges that we face while addressing our commercial needs and our responsibility for environmental stewardship,” he said.

Among its six strategic pillars are the creation of a US-backed open register for vessels in the US Virgin Islands, plans for a $200m venture capital fund to accelerate investment in commercially advanced technologies that solve maritime and ocean industry problems with a focus on environmental vulnerabilities and the construction of a $2.3bn transhipment port in the US Virgin Islands.

US-flagged tonnage currently accounts for 0.4% of the global fleet with Jones Act regulations making the US flag the most expensive in the world for shipowners.

After signing a Memorandum of Understanding with the US Virgin Islands, to establish an international open register in the US unincorporated territory, Eric Dawicki, President of the Northeast Maritime Institute, said the plan “is ultimately about providing rules-based order in the high seas that would allow the US to re-emerge as a competitive maritime nation”.

His counterpart, Albert Bryan, Jr the governor of the US Virgin Islands said the register would be built on a “highly transparent and rules-based maritime system”.

Setting out its ambitions, he said: “The US Virgin Islands flag will be built on conscientiousness not convenience. It will be focused on quality and will adhere to new environmental and efficiency practices to ensure that their carbon footprint is the best in the business with an incentives-based program. Sustainability has a new ally in the cleanest, most responsible, transparently operated fleet in the world.”

Joining them in the red, white and blue corner was Anuj Chopra, former US manager of Anglo-Eastern Group who believes there is plenty of opportunity to attract quality tonnage to a US Virgin Islands open register. “We’re not looking for minimum compliance, we’re looking for best practices,” he said.

“The most profitable maritime companies have realised that transparency is where their advantage lies, how they separate themselves from the crowd.”

The $200m venture capital fund, said Dawicki, would be used to target proven environmentally-friendly ocean technologies, aquaculture farms and greening marinas, among other things. While the plans to build a transhipment hub “for the 21st and 22nd century” requiring investment of $2.3bn would help, “alleviate supply chain congestion by moving a portion of east coast distribution from land to sea and increasing the number of ports importing goods from overseas”.