OPEC+ To Meet For Talks On Continuing Oil Cuts, But Members Are Growing Restless 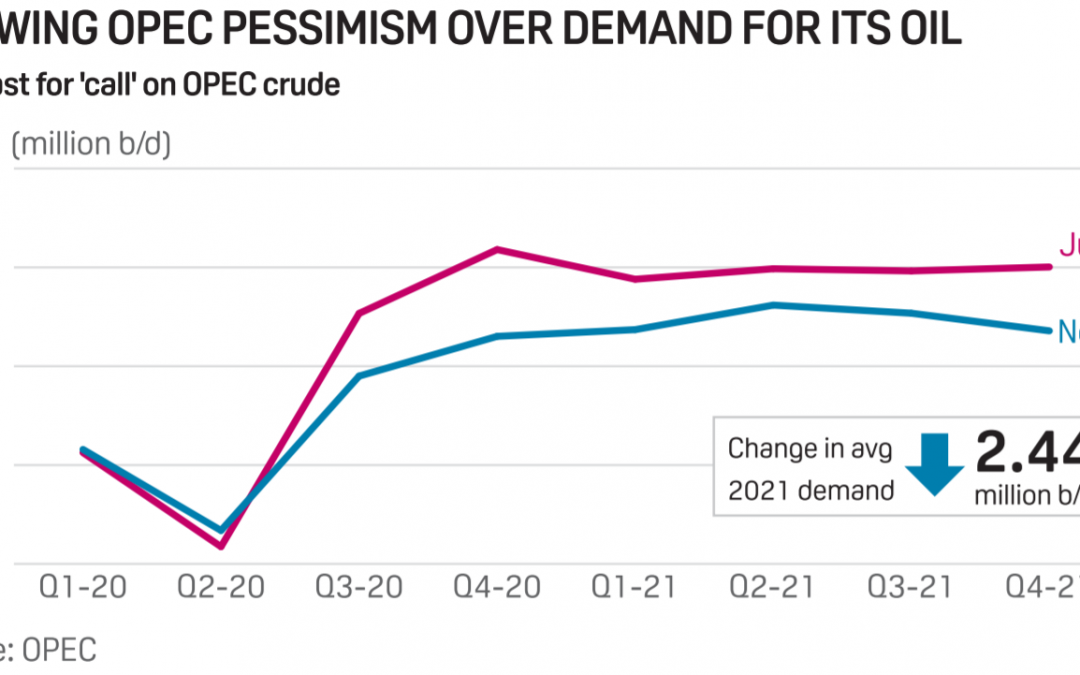 What seemed to be shaping up as a smooth OPEC+ meeting, with traders largely expecting a rollover of production quotas, has hit some turbulence with an airing of grievances.

The UAE may be considering splitting from the group, while Iraq and Nigeria are appealing to pump more, and the recent vaccine-propelled rally in crude prices will test everyone’s resolve to see through their landmark supply accord.

As a result, OPEC+ watchers and some delegates say they expect talks could get tense when ministers convene online Nov. 30-Dec. 1. An extension of current output cuts is still the likeliest scenario, but some hard conversations over the future of the deal — and the alliance itself — could complicate a decision.

“I think we’ll sweat this meeting more than the last one,” said Bob McNally, president of consultancy Rapidan Energy. “The announcement of the vaccines and the rising oil price have changed things. The prevailing price going into the meeting and the mood are important.”

In April, with oil prices spiraling down in the depths of the coronavirus pandemic, OPEC, Russia and other allies committed to record production cuts that were to gradually taper over two years as the global economy recovered. The current 7.7 million b/d in cuts – roughly 8% of pre-pandemic demand — are scheduled to ease to 5.8 million b/d in January.

But as recently as Nov. 16, an advisory panel of delegates recommended delaying the supply increase for up to six months, given the strong consensus view that surging COVID-19 cases in many western countries would pressure oil prices through early 2021, as well as the revival of Libya’s production following a ceasefire between rival groups. Though an OPEC member, Libya is exempt from having a quota under the OPEC+ deal.

Since then, three vaccines have demonstrated strong preliminary testing results, buoying hopes for an oil demand-boosting end to the pandemic if the injections become widely available in 2021. Brent crude prices have pushed near $50/b in recent days – their highest levels since March.

“It’s very likely that the path of least resistance is to extend the 7.7 million b/d cut for two to three months, maybe out to six, [but] in a rising price environment, OPEC unity is always harder to maintain,” said Helima Croft, global head of commodity strategy for RBC Capital.

The OPEC+ alliance will also have to contend with open challenges to how the supply accord is being administered by its two largest members, Saudi Arabia and Russia, which co-chair its monitoring committee.

Under the deal, all members are currently required to cut output by 18% from their November 2018 volumes, except for Saudi Arabia and Russia, which must cut 18% from 11 million b/d, a much higher reference level than what those two countries pumped that month.

Nigeria has also reportedly sought a reset of its quota and permission to produce more. Both Iraq and Nigeria have had lackluster compliance with their quotas.

The UAE, meanwhile, has privately discussed whether OPEC membership is in its long-term interest, given state oil company ADNOC’s ambitious upstream investments and the coming launch of a crude futures contract underpinned by its flagship Murban crude grade, S&P Global Platts previously reported. A subsequent statement from UAE energy minister Suhail al-Mazrouei that only referenced the country’s commitment to OPEC in the past tense has failed to quell the speculation over its intentions.

Many OPEC+ members have long chafed under the Saudi-Russia hegemony that dominates the group’s affairs, and it is not uncommon for some delegates and ministers to voice their objections or lay out their positions in the days leading up to a meeting.

But the stridence of the messages this time around has many delegates on edge.

Once OPEC source, who spoke on condition of anonymity, called the controversies a “big-time mess” and said members were “playing hardball” to negotiate better terms on the cuts going forward.

Another source said he expects the OPEC+ meeting itself to be relatively smooth but that the talks beforehand are proving difficult. A rollover of the current cuts is still the best play, he said, with the recent price gains more prompted by sentiment than actual supply-demand indicators, which remain fragile.

The disputes are “a matter of ego,” the source said.

OPEC’s Economic Commission Board began a two-day online meeting Nov. 25 to review oil market forecasts. Another technical committee session is scheduled for Nov. 27 to further hash out positions ahead of the full ministerial meeting.

In a fast-moving market that appears far more optimistic of the global economy’s prospects, OPEC+ ministers appear to have far more to discuss than they might have previously expected.

How the meeting goes will determine the direction of oil prices in 2021 – and perhaps the future of the alliance.

“There may be different views of the market recovery, but I don’t think a major [disagreement],” another delegate told Platts. “I hope there will be no issues [at the meeting].”

Still another said that so far, the mood among OPEC officials is calm, “but let’s see what happens during the weekend.”