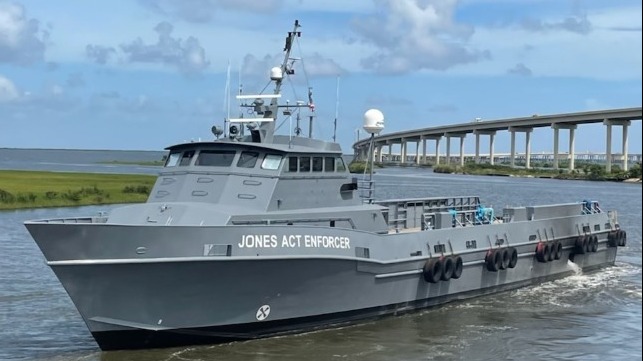 The Offshore Marine Service Association (OMSA) has announced plans to use a vessel to monitor foreign-flag operations in the U.S. Gulf of Mexico, intending to use it as a platform to gather photographic evidence of Jones Act violations. The evidence will be submitted to enforcement authorities, made public and shared with the media.

The Jones Act requires seaborne cargo shipped between two U.S. points to be carried by U.S.-built, crewed, and owned vessels. It is at the center of America’s maritime policy and domestic shipping law, and it is a mainstay support for U.S. shipowners, mariners and shipbuilders. The law is vital to sustaining a domestic maritime industry that is strong enough to support national defense objectives, and it enjoys the support of the U.S. Navy, Coast Guard, U.S. Maritime Administration, and many members of Congress.

According to OMSA, the Jones Act is not fully enforced by Customs and Border Protection (CBP), the agency tasked with overseeing compliance. CBP’s interpretation process has left room for foreign-flag offshore vessels to perform certain functions on the U.S. continental shelf, like heavy lift and pipelay operations, so long as these vessels do not “transport cargo” between U.S. points. However, the definitions of “transport” and “cargo” have been a matter of debate for decades, and OMSA says that CBP has allowed foreign-flag operators to push the limits too far.

“The Jones Act is very simple, if a foreign vessel picks up cargo at one point in the United States, and takes it to another point, it has broken the law,” Smith continued. “Foreign vessels have succeeded in confusing this issue for a long time. Now, we’re going to shine a bright spotlight on their actions and show everyone just how many foreign mariners are taking money out of U.S. mariners’ pockets. If foreign vessel owners or the companies they work for don’t like this scrutiny, I suggest they hire U.S. owned, U.S. crewed, and U.S. built vessels.”

OMSA’s new patrol vessel, the Jones Act Enforcer, is a 150-foot crewboat built in 2007. Formerly known as the Harvey Hustler, she is fitted with a 7,000 HP powerplant and can make 20 knots.