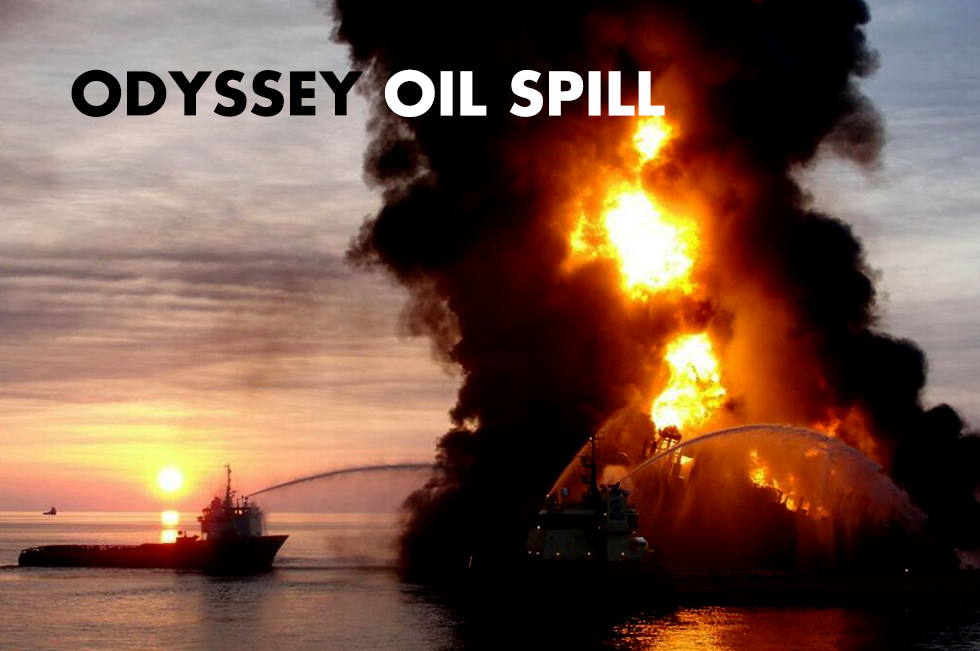 Oil spills have been one of the major concerns of the maritime world. Oil spills can have a disastrous impact on social, economic, and environmental consequences. In our series of major oil spills in the history of maritime, we have already seen four of the major and ruinous oil spills. The next one on our list is the Odyssey Oil Spill which is also known as the extremely catastrophic oil spill in history.

The Odyssey came into existence in 1971. It was 66,000 tonnage of tanker used by Polembros Shipping Ltd. On November 10, 1998, The Liberian tanker, Odyssey, filled with and carrying 132,000 tonnes of North Sea Crude Oil, was traveling on the North Atlantic Ocean on its journey from Scotland to Canada, when it caught with the storm, 700 miles off the Canadian coast. The tanker crevice into two parts due to an explosion occurring on board and begin to sink. Whilst it sank, a fire began on the stern section, causing all of the oil on the ship to catch on fire. As a result, all 27 crew members aboard succumbed to the ship. After the ship sunk it released 43 million gallons of crude oil. It covered about 3 miles radius. To this day, the Odyssey Oil Spill stands in the sixth-largest oil spill of all time. Some of the oil reached the coastline, due to the currents from the Atlantic moving it to England. Following the incident, an oil slick 16KM long by 5KM wide drifted out to sea and never reached the shore.

Oil spills penetrate into the structure of the plumage of birds and the fur of mammals, reducing its insulating ability, and making them more vulnerable to temperature fluctuations and much less buoyant in the water. Clean-up and recovery from an oil spill are difficult and depend upon many factors, including the type of oil spilled, the temperature of the water (affecting evaporation and biodegradation), and the types of shorelines and beaches involved. Spills may take weeks, months, or even years to clean up. Although the accident was one of the major in maritime history, there was no concern for pollution on the coastline as none of the oil reached the coastline. Like the Odyssey, many of the oil spills we have today affect the marine ecosystem dramatically. The chemical constituents are poisonous, so internal exposure, such as ingestion or inhalation and external expose, like skin and eye irritation are direct ways things are dying in the ecosystem. The Advisory Committee on marine pollution international council for the exploration of the sea published an analysis of the spill in their 1990 marine pollution yearbook in which they analyzed that there was a serious effect on Krill in that area, which in turn could have affected other species in the food chain. Oil spills affect the environment in many harmful ways. Oil spills are very bad for aquatic life (organisms that depend on each other and the environment’s life) because it stops amounts of sunlight from reaching the surface. It also ruins the level of dissolved oxygen. Crude oil ruins the waterproofing of feathers and fur that belong to animals. This means oil-coated birds and mammals may die from hypothermia (low blood temperature in warmblood creatures). The oil can be toxic and it can damage the animal’s habitat and reproductive rate. The oil spill also damaged plant life. One of the most industry affected by this oil spill is fishing because the oil damages the fish.

After the oil is spilled at sea and with the effect of wind and water current, the oil spreads out and moves on the water surface as a slick a few millimeters thick. At the same time, it undergoes a series of chemical and physical changes. These processes are collectively termed ‘weathering’. Weathering causes the spilled oil to break down and become heavier than water. Some of these processes, like the natural dispersion of oil into water, lead to the removal of the oil from the sea surface and facilitate its natural breakdown in the marine environment. Others, particularly the formation of water-in-oil emulsions, cause the oil to become more persistent and remain at sea or on the shoreline for prolonged periods of time. The speed and relative importance of these processes depend on a number of factors. These include the quantity spilled, the oil’s initial physical and chemical characteristics, weather and sea conditions, and whether the oil remains at sea or is washed ashore. Ultimately, the marine environment usually eliminates spilled oil through the long-term process of biodegradation. An evaluation of the impact of oil spills on seabirds has not been fully appreciated during incidents, despite pressure from the public concern, media, and other interested parties for precise and up-to-date information on the damage. Consequently, the approximate numbers of seabird casualties involved in many major spills have only been estimated, while impacts at the population level have been difficult to determine. Natural variation and the huge range of factors that influence bird population statistics make it difficult to assess the impact of oil spills on sea birds.