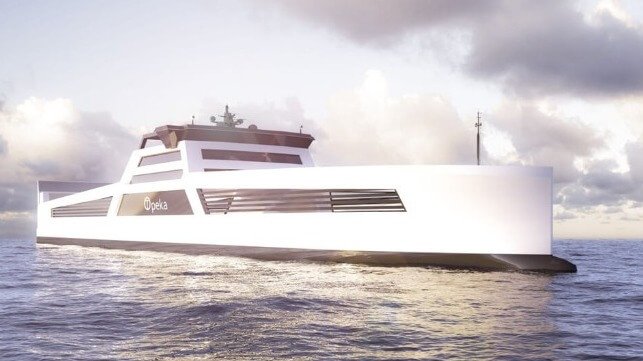 The Norwegian Government has awarded $25 million to a project to build two zero-emission hydrogen-powered vessels for operation in the offshore industry and along Norway’s western coast. The zero-emission shipping company Topeka, part of the Wilhelmsen group, said that all the approvals were received for the funding and that it is prepared to move forward with the project as soon as the hydrogen infrastructure and supply is ready for the maritime industry. They expect to have their vessels in service in 2024.

“With ESA’s (EFTA Surveillance Authority) approval, our hydrogen-powered zero-emission vessels are one step closer to reality,” says Topeka CEO Steinar Madsen. “Now we are awaiting hydrogen to become available as a vessel fuel.”

Going under the concept name “Topeka: base to base,” the company says the vessels will be the first of their kind to enter commercial service in 2024. The Topeka will be built for zero-emissions through a combination of 1,000 kWh battery capacity and a three-megawatt PEM (proton exchange membrane) hydrogen fuel cell. Supply agreements are in place for the liquid hydrogen and the company is only waiting for the supply to become available in sufficient quantity to support the operations,

The plans call for the two vessels to sail on a fixed schedule along the Norwegian western coast. They will provide transport service between offshore supply bases, carrying coastwise customer cargo between Stavanger, Haugesund, Bergen, and Kristiansund, and containerized liquid hydrogen to bunkering hubs along the same route. As such, they would become the first hydrogen vessels in Norway to maintain a regular service and it believed would help to build the hydrogen infrastructure.

Wilhelmsen explains that Norway’s west coast is dotted with bases serving the offshore industries, with base-to-base transport representing a heavy-duty transport route eminently suited it believes to liquid hydrogen operations. The bunkering hubs that will be established along the route will in the future supply LH2-powered vessels including ferries and seagoing tonnage.

“The base-to-base project will secure seaborn and emission-free hydrogen distribution and is our first step towards scalable zero-emission maritime operations,” explains Madsen. “Together with Aurora, the liquid hydrogen factory at Mongstad in Norway, we will create a full LH2 infrastructure and commercial ecosystem, while at the same time removing yearly some 25 000 trucks from the roads. Once the LH2 infrastructure is in place, hydrogen will become an available fuel for offshore and onshore purposes, and the Norwegian government foresees that making hydrogen a commercially available fuel, will pave the way for an emission-free maritime sector. It is just a matter of getting started on hydrogen production.”

The awarding of the funding was first announced nearly a year ago. It will be coming from Enova SF, a special fund owned by the Norwegian Ministry of Climate and Environment. Its purpose is to contribute to reduced greenhouse gas emissions by developing energy and climate technology and a strengthened security of supply. Because the Topeka project exceeds the maximum aid allowed for a single project under the parameters for the fund, it needed to be reviewed and approved by ESA.