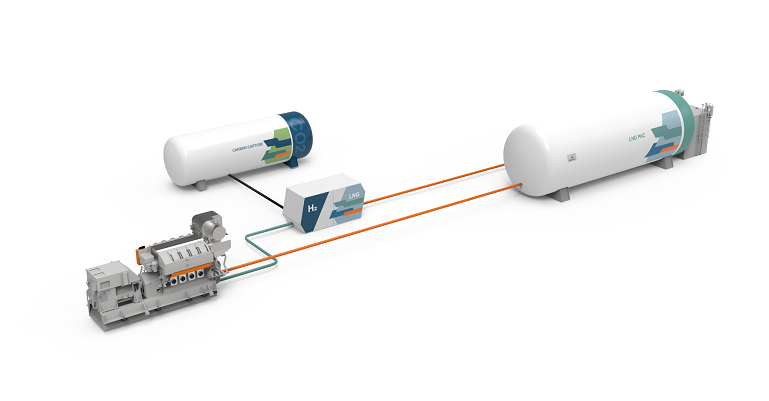 Wärtsilä and partners including ABB, RINA, Helbio, the Liberian Registry, and an unidentified energy major, have embarked on a project to generate hydrogen for fuel aboard ships.

The concept is based on combining LNG with steam to produce hydrogen and carbon dioxide. The fuel would then be used directly in internal combustion engines or fuel cells while the carbon dioxide would be liquefied using the cryogenic stream of LNG that would normally be used as fuel. It would then be landed ashore for storage.

The project could confirm a number of benefits envisaged by the partners. The ship-specific fuel system would mean that vessels could bunker LNG from existing facilities, thereby saving vast sums on additional shoreside infrastructure required for hydrogen fuel supplies.

Meanwhile, the direct use of hydrogen on board ship would bypass the challenge of storing it. And if the concept were found to be practical, it could generate a 70% saving in carbon intensity and a faster and more affordable pathway to a low-carbon fuel option.

Speaking for Wärtsilä, Lars Anderson, Product Management and Sales Support Director, said: “Our gas engines are already able to use mixtures of hydrogen and LNG, and our future efforts will be to reach 100% hydrogen fuel. We are totally committed to supporting in every way possible the decarbonisation of shipping operations.

“This project is one more example of this commitment, and we are very pleased to be partnering with other stakeholders to make the IMO 2050 target achievable. This project will give owners a real chance to stay ahead of the competition in terms of efficiency and sustainability.”