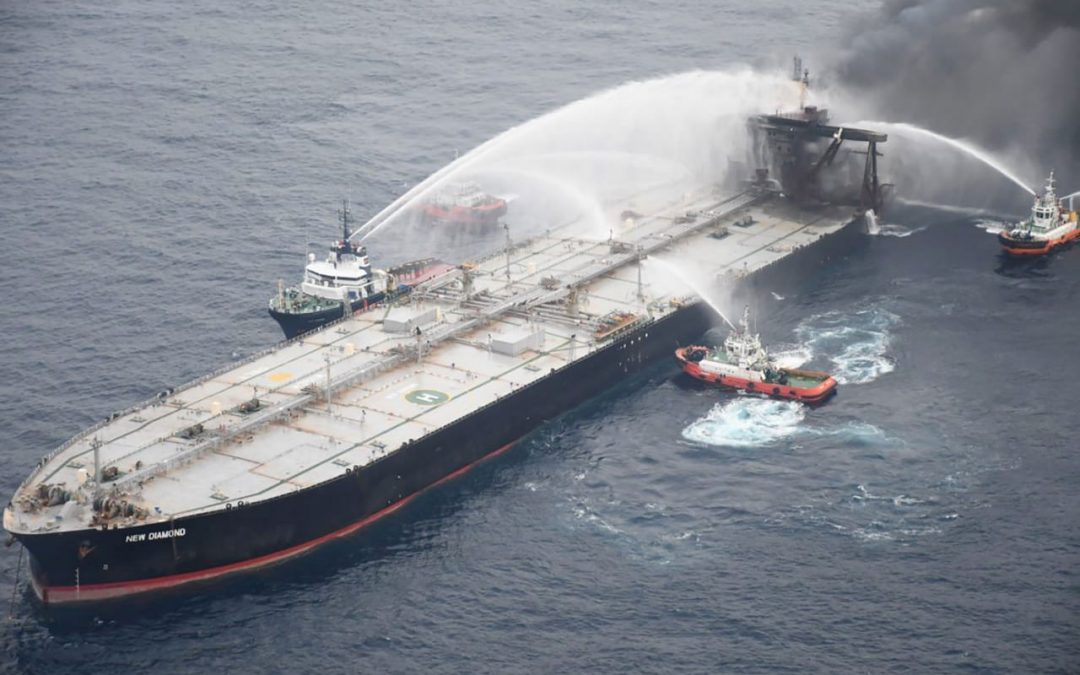 The captain of the fire-stricken tanker New Diamond has been freed of his travel restrictions as the case of the vessel begins to wind down eight weeks after the vessel caught fire in the waters off Sri Lanka.

The tanker’s Greek captain, Stereo Sterio Ilias, earlier this week agreed to plead guilty to charges related to causing an oil spill and violations of the Marine Environment Protection Authority Act brought against him in the Colombo High Court. The Attorney General had asked the court to order approximately $1 million in restitution, but the court lowered it to approximately $65,000.

After paying the fines, Colombo Magistrate’s Court removed the travel restrictions that had been placed on Captain Illias. No objections were raised by the government so the captain is free to depart Sri Lanka when travel arrangements can be made. When he was indicted, the Attorney General had sought to have him remanded, but the court refused and instead imposed an international travel restriction.

In addition to the fine imposed on the captain, the owners of the tanker, New Shipping of Greece, separately agreed to compensate Sri Lanka for its firefighting efforts. Initially, Sri Lanka presented a preliminary bill for approximately $1.85 million, but after further negotiations the cost was settled at $2.4 million for all of their services. Sri Lanka required the payment before they permitted the tanker to be towed out of their territorial waters.

The New Diamond was escorted away from Sri Lanka by the coast guard. While they only acknowledged the diesel oil spill from the vessel at the end of the firefight, since then there have been further accusations in Sri Lanka of damages caused by the vessel and the firefighting efforts. The Sri Lanka media is reporting that dead sea creatures have been turned over for examination to see if their death might have been related to the oil spill or chemicals used to fight the fire.

The Sri Lanka Coast Guard handed off the monitoring of the tow to the Indian Coast Guard, which also escorted the ship and monitored the situation while the vessel was in India’s waters. Indian forces also participated in the week-long battle to douse the fire that started in the ship’s engine room on September 2. At the time, the New Diamond was loaded with approximately two million barrels of crude oil bound from Kuwait to an Indian refinery. The Indian media recently reported that India’s forces are preparing a bill for their services during the firefight, but the decision to present it would be up to the Indian government.

The New Diamond is being towed to the Port of Fujairah in the United Arab Emirates (UAE) where it is expected the crude oil will be pumped to another tanker that will then complete the delivery to the Indian refinery. The last reports on the status of the vessel came from the Maldivian National Defence Force which reported on Twitter that the Indian Coast Guard had handed off the monitoring to their forces last week. “MNDF CG is closely monitoring the transit & are well prepared to respond in the event of an incident during this transit,” the Maladies said in their message.