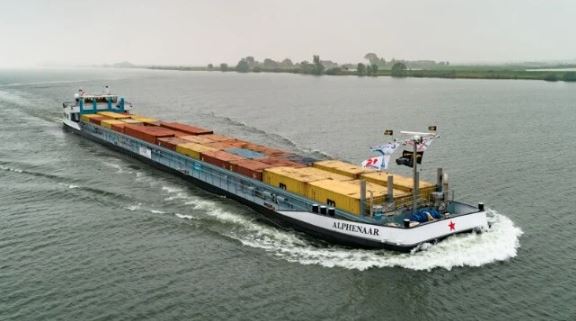 The government of the Netherlands is making a significant investment to accelerate the decarbonization of inland shipping. The Ministries of Economic Affairs & Climate Change and Finance are committing $55 million for a rechargeable battery system launched last year for inland shipping in the Netherlands. The goal is to support the development to reach critical mass within the shipping industry.

As part of its overall decarbonization plan for the country, the Netherlands committed itself to reduce CO2 emissions from the Dutch inland shipping fleet by between 40 and 50 percent in 2030 compared to 2015. However, to achieve this goal it is estimated that a minimum of 150 vessels will have to operate with zero emissions by 2030.

Announced in 2020, Zero Emission Services was developed in a partnership between the Port of Rotterdam Authority, financial giant ING bank, energy and technical service provider ENGIE, and maritime technology company Wärtsilä, to provide an innovative system of rechargeable batteries and power stations for the inland shipping industry. ZES’s goal was to develop a complete range of products and services, based on interchangeable battery packs charged with renewable power, charging stations, technical support, and an innovative payment model where shipowners only pay for the rental of the batteries.

The first ship, the Alphenaar of CCT Shipping, began using the system in September 2021 sailing between Alphen aan den Rijn and Moerdijk in operation for Heineken. The vessel is exchanging batteries using recharged packs while the others remain at charging stations to be ready for future sailings. However, according to ZES unless there is a simultaneous investment in electrically powered ships, battery containers, and docking infrastructure, the breakthrough towards zero-emission will not happen. ZESpacks cannot be used on ships without an electric drive train and the ships that do have an electric drive train cannot be charged without a docking infrastructure.

The government has set aside €20 billion for innovative projects to be invested by the Nationaal Groeifonds between 2021 and 2025. The fund is investing €50 million ($55 million) into ZES. The investment will be used for the development of 75 battery containers for maritime application (ZESpacks), 14 docking stations where the ZESpacks are charged, and 45 electrified inland vessels.

“This is not only good news for the inland shipping sector and ZES, but above all, it leads to a better living environment. Now, completely clean sailing will be possible without the emission of CO2, nitrogen, and particulates,” said Bart Hoevenaars, CEO of ZES. “The Nationaal Groeifonds supports skippers in investing in an electric propulsion line. Zero Emission Services can now invest in the most expensive part, the battery containers,” explaining that they believe with 45 vessels the system will achieve critical mass.

When the first 45 ships are sailing with the ZES system, the expectation is that the market will be able to grow in the number of ships, battery containers, and docking stations by its own means. The investment will make it possible to simultaneously invest in the docking infrastructure, the energy carriers, and the ships with an electric driveline to accelerate the development.

ZES expects with the new investment, publicly accessible docking stations can also be realized along several crucial shipping routes for inland navigation in the Netherlands. By making it possible to invest in these three things simultaneously, the company says, “the well-known chicken-and-egg dilemma for green transport is broken.”