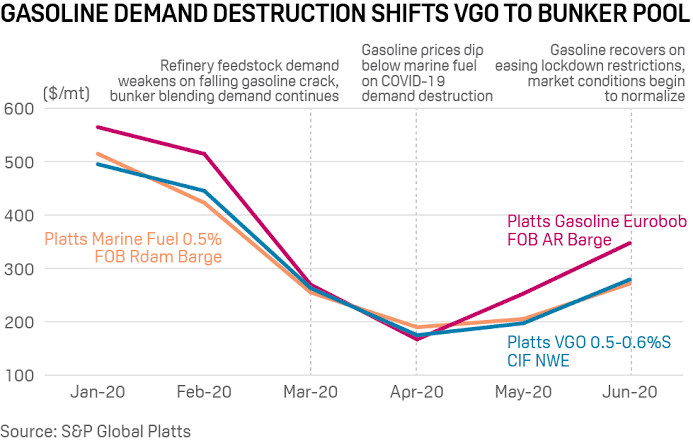 Shifting fundamentals in European transport fuel markets have affected operational requirements for shipowners using VLSFO, as blenders alter feedstocks to make their economics work amid the coronavirus pandemic while the bunkering industry grapples with this year’s lower sulfur content rules.

Travel restrictions due to the pandemic led to plunging demand for gasoline and diesel while shipping operations continued, changing the blending components entering the bunker pool.

With demand for road fuel weaker, refiners cut back on gasoline production amid sharply narrower fluid catalytic cracking margins. Low sulfur vacuum gasoil subsequently struggled to find a home as a refinery feedstock for gasoline, particularly through April and early May when the impact of lockdown measures were felt the most.

“The statistics we have seen suggested that…at the start of the COVID crisis…as gasoline demand fell away, vacuum gasoil didn’t have anywhere to go, so it then came into the bunker blending pool,” Global Manager for Quality and Claims at marine fuel management company Integr8, Chris Turner, said in a webinar hosted by the company June 18.

This collapse in demand led to prices for LSVGO falling to values not seen since January 2002, assessed at $134.75/mt April 27.

VGO bunker blends
With VGO so readily available and cheap during this time, many looked to use the product in the VLSFO blending pool as storage was strained for all oil products.

Known to be waxy in nature, an increase in VGO bunker blends resulted in a spike in pour point properties, Integr8’s Turner said.

Distillate blends
Since countries Europe started easing lockdowns, however, a gradual recovery in the gasoline market appears to be affecting the bunker blending pool once again, as players shift their attention instead to blends including distillates such as gasoil.

A pick-up in gasoline and diesel demand has been reflected in higher VGO demand. Its value has more than doubled since the end of April, with LSVGO CIF NWE assessed at $280/mt June 24.

“Now we have seen a little bit of a drop in pour point, because of the fact that the gasoline market is recovering a little bit,” Integr8’s Turner said.

“Because we now have a narrowing of the crack between VLSFO and the distillates, we’re now seeing an increase in distillate blends [in bunker fuels].”

As a consequence of the narrowing spread, “we’re seeing the viscosity fall again,” Turner said.

“Lower VLSFO viscosity has been linked with a number of potential issues, from purification difficulties to stability and ignition problems,” Anton Shamray, Senior Research Analyst at Integr8 has said previously.

One market source noted that there are many variants of VLSFOs in the market, both region- and blender-specific. “There are different streams of product from everyone.”

While the pricing impact of IMO 2020 — the International Maritime Organization’s stricter rule on sulfur content in shipping fuel that came into force in January — has been put on the back-burner by the coronavirus, surplus supply across global oil markets is adding a new twist to VLSFO specifications.

However, while the changing varieties of VLSFO and other effects of the coronavirus have certainly kept shipowners on their toes so far this year, transitioning into an IMO 2020 world has been relatively seamless, analysts say.