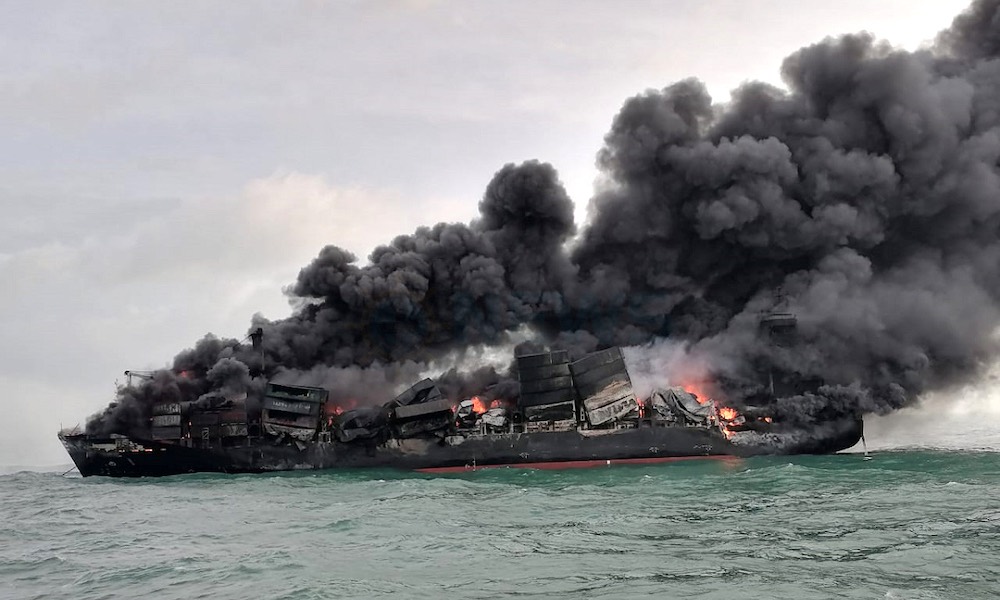 The wreck of container ship X-Press Pearl will remain on the seabed off Sri Lanka until after the South Westerly Monsoon has passed, according to the vessel’s owners.

X-Press feeders said the ship was resting on the seabed at a depth of 21 meters, with caretaker salvors on a 24-hour watch to report leaks, spills and debris from the wreck. Caretakers are due to install navigational warning lights around the wreck, and carry out sonar scans for submerged hazards when conditions allow.

“Due to the exposed nature of the anchorage to the prevailing South Westerly Monsoon, it is likely that the wreck removal can only start after the SW monsoon subsides; caretaker services will remain  on site until then,” said the company.

Sri Lanka’s SW monsoon season lasts from around May through September, according to Sri Lanka’s Department of Meteorology.

1486 containers were left on the vessel when it sank; a grey sheen and discolouration of the sea around the wreck have been visible since the stern became submerged, the company said in a press release.

“Representatives of ITOPF and Oil Spill Response are monitoring updates from the scene and are ready to deploy in case of any reported spill,” said the release.

X-Press Pearl started to sink on June 2 after a container fire burned on the vessel for two weeks. Explosions were reported from the vessel in late May. The crew were safely evacuated, with two crew hospitalised for leg injuries. Debris and containers from the vessel washed up on nearby beaches and local fishing fleets have been banned from fishing due to pollution concerns. The ship’s Russian captain was arrested and released on bail on suspicion of committing offences under the Marine Pollution Prevention Act, according to reports.