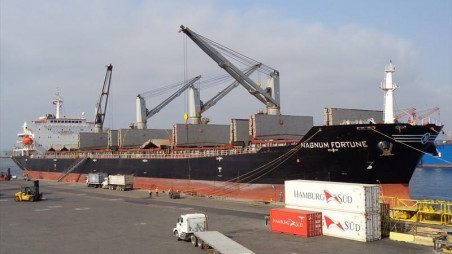 Asteady growth trend has evolved in the world merchant ship fleet during the past few years. But this broad view hides contrasting changes among the main vessel types. In the period ahead, further large variations are likely among categories.

Bulk carriers, tankers, container ships, and liquefied natural gas carriers are the four biggest categories, together comprising 90 percent of the entire world merchant ship fleet’s carrying capacity. In each of these segments newbuilding deliveries and scrapping volumes have varied both over time and in proportion to the existing fleet size. Greatly differing annual growth rates resulted. However in 2022 more uniformity is expected to be the outcome, followed by a resumed wider pattern of increases in 2023.

Indications for next year point to decelerating growth in the bulk carrier and tanker fleets, which may see minimal increases. By contrast, the LNG carrier fleet could maintain a brisk growth rate, while the container ship fleet’s expansion accelerates, becoming rapid. Such ideas are tentative, for two reasons. Future newbuilding delivery volumes are sometimes less clear and predictable than orderbook schedules indicate. A much more unpredictable influence is scrapping (recycling) volumes, forecasts of which typically are surrounded by huge uncertainty.

Looking at the trend in the past few years shows a remarkably steady pattern of annual growth rates in the world merchant ship fleet as a whole. Capacity in the cargo-carrying sectors together (the four largest listed above and several smaller categories), calculated in gross tonnes as a common measurement, averaged 3.4 percent in the five years from 2017 to 2021.

At the end of 2016 merchant ship cargo-carrying capacity was 1,201 million gross tonnes. During the next five years to end 2021 this total rose to 1,374m gt, based on Clarksons Research data. The annual growth rate varied between 3.1 percent and 4.2 percent. In the two most recent years, 2020 and 2021, growth rates of 3.1 percent and 3.3 percent respectively were recorded, confirming the stable pattern of annual increases.

The overall annual expansion rate for 2021 was the result of a wide range of outcomes among the segments. Only bulk carriers, recording 3.6 percent, grew at a rate similar to that of the entire cargo-carrying fleet. Tanker fleet capacity increased relatively slowly by 1.7 percent, container ships saw a 4.5 percent rise, while the LNG carrier fleet expanded rapidly by 9.8 percent.

Estimates for 2022 are still tentative, albeit assisted by data for part of the year. Slightly lower merchant ship fleet growth than seen last year, at around 3 percent seems likely. Monitoring how the various fleet segments are progressing also suggests that a tighter range is likely to be a feature. All four largest categories – bulk carriers, tankers, container ships and LNG carriers – could see annual 2022 increases within or close to 3 to 4 percent.

Next year a wider range of segment growth rates may unfold, while the world merchant ship fleet’s cargo carrying capacity expansion as a whole may decelerate. Calculations reflect known orderbook schedules, enabling actual newbuilding deliveries to be estimated, albeit rather approximately. But forecasts of scrapping volumes remain highly speculative, dependent on market influences which may be substantially different to what is now envisaged, subject to changing circumstances and perceptions.

Ideas that currently seem plausible point to 2023 growth rates among the main segments within a range of between 1 percent and 8 percent. For tankers, lower newbuilding deliveries and higher scrapping (compared with this year) may result in growth of around 1 percent, while for bulk carriers stable deliveries and higher scrapping may be reflected in 1-2 percent growth. In the LNG carriers segment higher newbuilding deliveries and more scrapping could result in a continued steady 4 percent rise, accompanied by a similar combination providing a 7-8 percent expansion for container ships.

These broad guesses are based on varying changes in newbuilding delivery volumes, up or down, among the segments. But for scrapping a common theme applicable to all the segments is the probability of far higher demolition sales activity in 2023 than seen this year. Estimates reflect an expected pick up after generally low demolition sales levels in recent years and an even lower level in 2022. Another argument suggesting greater recycling is the tightening international maritime regulations being implemented at the beginning of 2023. Numerous ships face a challenge to comply and many could become uneconomic, leading to more scrapping.

The view of merchant fleet evolution beyond next year is more opaque. One aspect likely to prove influential, however, is the large orderbooks now accumulating for container ships and LNG carriers extending into 2024 and later. The orders imply that newbuilding deliveries for these vessels will remain elevated, possibly ensuring further rapid fleet expansion, moderated by whatever volume of scrapping activity ensues.

Over the period immediately ahead limited availability of shipbuilding berths will constrain the scale of additional newbuilding orders being placed. Limitations, especially for the two ship types which have been so heavily ordered in the past twenty four months, container ships and LNG carriers, are already evident. Subsequently, in 2024 and later, potential exists for additional new orders to emerge.

An insight into prospects for newbuilding deliveries in the next couple of years is provided by the chart, showing annual world orders placed for the four principal ship types, in deadweight tonnes. Last year’s dramatic rise in container ship orders was accompanied by large increases in bulk carrier and LNG carrier ordering, contrasting with a decrease in tankers. The outcome for 2022 as a whole is likely to be plummeting orders for tankers, bulk carriers and container ships, contrasting with an extended upsurge in LNG carriers.

Another indicator of future fleet evolution is the newbuilding orderbook expressed as a proportion of the existing world fleet. For the entire global cargo ship fleet, orders for ships to be built primarily in the three main shipbuilding countries – China, South Korea and Japan – comprised just under 10 percent of the current fleet’s deadweight capacity at the end of October 2022, according to Clarksons Research figures.

What will shape the future fleet?

How the world cargo-carrying fleet evolves in the future will be influenced by familiar and novel influences. Traditional influences determining ordering patterns and newbuilding ships entering the market, and the exit for scrapping of old or uneconomic ships will continue. Augmenting these long-established drivers is the growing influence of tightening international maritime regulations, especially those related to carbon emissions, affecting both new and old ships.

Ideas about future fleet growth, always partly speculative because of the shipping market’s unpredictable aspects, are now more complex and consequently less solid. The regulatory changes unfolding have already restrained newbuilding orders in some segments compared with what many observers would have expected to result from freight market changes. During the period ahead reinforced regulations could greatly increase pressure to scrap older vessels, although currently it is difficult to estimate the extent of this pressure.

An investment in any type of newbuilding vessel is often based on at least a twenty year lifespan of trading, and in practice 25-30 years has been widely achieved. Amid this perspective about usable asset life justifying the cost of new tonnage, shipowners now seek assurances about what fuel and ship propulsion method will be acceptable to regulators (and vessel users) over the ship’s expected lifetime extending up to mid twenty first century. Avoiding premature obsolescence is a critical aspect. Uncertainty about future changes in regulations which may be introduced, affecting usage of alternative fuels, evidently is deterring orders and this puzzle may persist for some time.

Many alternatives designed to replace traditional bunker fuel and facilitate the decarbonisation of shipping are being considered. But in most cases extensive further research and development is needed to overcome problematical aspects of the new fuels and to provide the technology needed to use these safely and economically.

Several alternative fuels are at the forefront among options being considered by shipowners, or already have been adopted in newbuilding orders. Currently, reflecting the acute uncertainties surrounding some options, LNG is proving the most popular and practicable although it is widely seen as a ‘transition’ fuel because in standard form carbon emissions reduction is restricted. Newbuildings designed for liquefied petroleum gas and methanol fuels also have been ordered, while ammonia is becoming more prominent even though toxicity is a problem and large engines able to use this fuel are not yet commercially available.

Imponderables are not limited to maritime regulations’ unclear impact on fleet capacity provided by new and old ships. Linked to the broader global objective of reducing and eliminating greenhouse gas emissions is the possible effects of this imperative on cargo volumes carried. About one-third of all world seaborne trade consists of oil and coal, fossil fuels which are a target for sustained downwards pressure (‘demand depletion’) to achieve decarbonisation goals. In the longer term and perhaps starting fairly soon both oil and coal transport requirements could begin an extended declining trend. This prospect overshadows the tanker and bulk carrier markets, creating further uncertainty about the scale of fleet development needed.

Fleet drivers: the next couple of years

Focusing on the near future, one important sign of prospects for fleet growth is the current newbuilding orderbooks and schedules indicating the timing of vessel completions and delivery to shipowners. Another element is estimates of likely further ordering for delivery relatively soon, within the next year or two. Adjustments are made for orderbook ‘slippage‘, a consequence of delays, postponements and cancellations, usually a relatively minor modification. Also affecting assessments of fleet growth prospects is calculations for volumes of ships sold for scrapping, typically surrounded by an altogether different magnitude of much greater uncertainty.

These two elements essentially determine forecasts of net fleet growth in 2023 and 2024, as discussed in the ‘future fleet outlook’ section above, based on conventional analysis. Future ordering patterns through next year and beyond, and the newbuilding delivery volumes resulting are likely to partly reflect shipping market changes unfolding over the period. These are not clearly predictable, but only broadly foreseeable. Assumptions about changes in ship employment opportunities, markets and earnings for major parts of most segments may need modification as an ongoing process, perhaps with occasional major revisions.

Potential for more 2023 delivery newbuilding orders to be placed is limited, but the orderbook schedule further ahead appears less constrained. Any upwards ordering potential for 2024 and later nevertheless is likely to continue to be affected and probably held back – especially in the bulk carrier and tanker segments – by uncertainty about alternative fuels and technology.

Future ship scrapping also will be affected by new regulations. The likely magnitude of this aspect is becoming clearer, although it remains difficult to estimate volumes of demolition sales resulting from new rules being introduced next year. The full effects are expected to evolve over a period of several years, becoming more stringent from 2024 onwards.

At the beginning of 2023 the energy efficiency existing ship index (EEXI) and the carbon intensity indicator (CII), regulations agreed at the International Maritime Organization, will be implemented. Following earlier introduction of the energy efficiency design index (EEDI) for newbuilding vessels, the new rules extend the greenhouse gas emissions reduction strategy and targets to the entire world fleet of merchant ships (vessels above a minimum size).

Compliance with the EEXI’s stipulations is expected to entail technical modifications in many vessels – installing energy saving technologies – or may result in adoption of engine power limitation devices, resulting in slower average voyage speeds. The CII is an operational energy efficiency measure requiring continuous improvement of a ship’s carbon intensity, based on annual reduction targets to achieve an enhanced CII performance rating. Calculations based on emissions from fuel used will vary depending on a ship’s trading pattern, which potentially could be modified to improve performance.

For some older ships it may prove difficult to comply with these new rules. Substantial scrapping eventually may be a consequence, although the extent and timing of additional demolition sales foreseeable is unclear. Several observers envisage that ship recycling activity could accelerate rapidly over the next two years, to levels not seen for a long time. If that possibility occurs, a large proportion of newbuilding deliveries will be offset, greatly restraining fleet expansion.