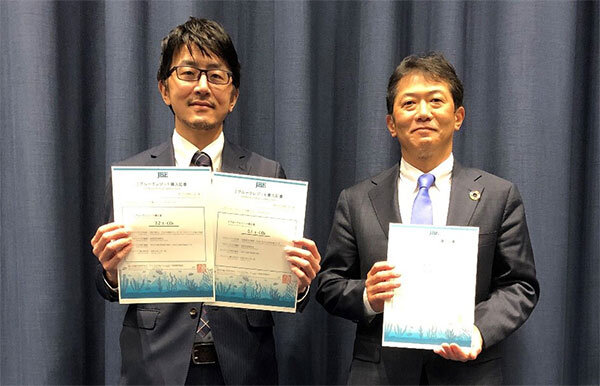 The “J Blue Credit” targets blue carbon, which is carbon dioxide (CO2) absorbed by marine and coastal ecosystems such as seagrass meadow, and is attracting attention as a new credit aimed at accelerating steps to mitigate climate change.

The project began on a trial basis in fiscal year 2020, and in its second year, FY2021, credits were issued through restoration activities of seagrass meadow and tidal flats in Yokohama City, at the Port of Tokuyama Kudamatsu in Shunan City, and Hyogo Canal. Today, a ceremony for issuance of certificates was held for sellers and purchasers.

MOL will contribute to enhancing the implementation and sustainability of initiatives to restore and protect seagrass meadow in each area through purchase of credits for about 11 tons, among the total about 65 tons of credits issued. Blue carbon ecosystems such as seagrass meadow not only fix and absorb carbon, but also provide diverse benefits including food supply, water purification, and species conservation, supporting people’s lives.

MOL-purchased credits are planned to offset CO2 emitted from world’s first zero emission electric tanker “Asahi” (Note 5), which is newly built by its group Asahi Tanker Co., Ltd. (Headquarters: Chiyoda-ku, Tokyo) and is slated to be delivered at the end of this month, will be repositioned from the shipyard in Marugame City, Kagawa Prefecture to Kawasaki City in Kanagawa Prefecture where the power supply facility is located. In the future, the vessel will contribute to CO2 reduction of about 280 tons, 60% (Estimated values) annually compared to conventional vessels by using renewable energy-derived electricity. MOL strives to expand its use of electric propulsion (EV) vessels in coastal shipping in cooperation with Asahi Tanker.

The MOL Group engages in creation of negative emissions (Note 6) including blue carbon, in cooperation with various stakeholders, with the aim of achieving net zero emissions targeting all of scope 1, 2, and 3 by 2050, as stated in the “MOL Group Environmental Vision 2.1” (Note 7) established in June 2021. In this way, it will ensure a prosperous future from the blue ocean, by contributing to the sustainable growth of people, society and the planet, for all life living in the next generation.