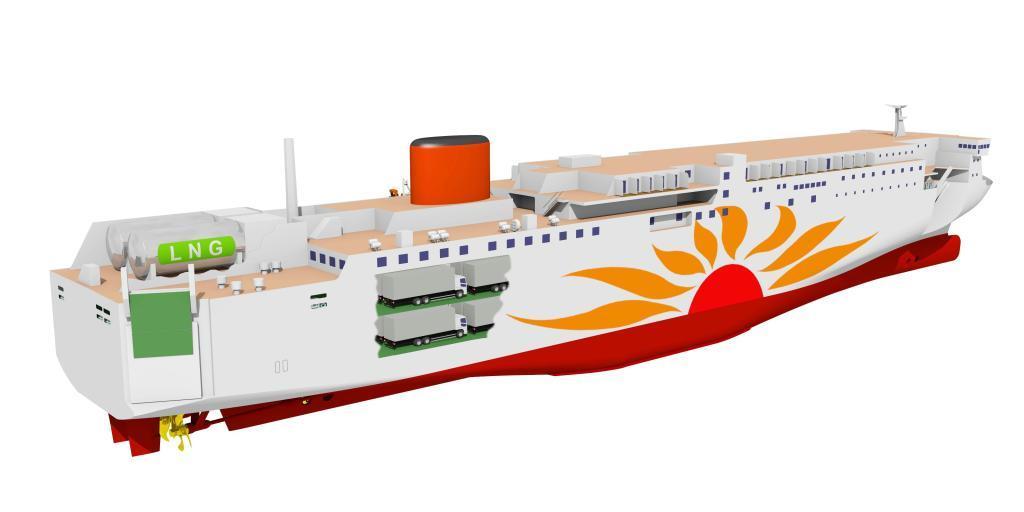 Mitsui O.S.K. Lines is continuing preparation for the launch of Japan’s first LNG-fueled ferries due to enter service in late 2022. The company announced this week that supply agreements have been established for the fueling of the two ferries that are currently under construction for its Ferry Sunflower group company.

The order for the two 656-foot LNG-fueled ferries was placed in December 2019 with Mitsubishi Shipbuilding. The ferries will be equipped with high-performance dual-fuel engines which the company says will reduce CO2 emissions by 20 percent compared to the current vessels and virtually eliminating sulfur oxides emissions. The new ferries will also be larger than the current vessels that were built in 1997.

The LNG ferries, which will be approximately 17,500 gross tons, will provide passengers with comfortable accommodations and reliable schedules. The advanced propulsion plant will be also quieter than the current vessels, ensuring smoother, more relaxing travel. They will have a passenger capacity of 763 people versus 710 on the older ships that they are replacing and will carry up to 136 trucks versus 92 on the older ships.

Operating under charter to Ferry Sunflower Limited, the new ferries, which have tentatively been named the Sunflower Kurenai and the Sunflower Murasaki, will sail 12-hour voyages on the approximately 230 nautical mile route between Osaka and Beppu. Under the LNG supply agreement with Kyushu Electric Power Co., the two vessels will be fueled while berthed in the Beppu Port.

Around 50 tons of LNG fuel per day will be supplied via truck-to-ship using tank trucks loaded at the Oita Liquefied Natural Gas Company’s loading stations. Niyac Corporation will transport and supply LNG to the ferries from its tank trucks parked on the pier and Oita Gas Co will oversee safety during LNG bunkering. To speed the fueling process for the ferries, the company plans to build a skid that can accommodate up to four tanker trucks, allowing them to fuel the vessels simultaneously.

Japan has also begun to develop its first ship-to-ship LNG fueling capabilities and expects to introduce more LNG bunkering ships to provide greater support to the shipping industry. In 2019, MOL introduced its first LNG-powered vessel, the tugboat the Ishin which also became the first LNG-fueled tugboat serving Osaka Bay. MOL also promotes the wider use of LNG as a marine fuel as a forerunner in the trend toward LNG-fueled ships by cooperating in LNG fuel supply programs in the ports of Kobe and Nagoya.