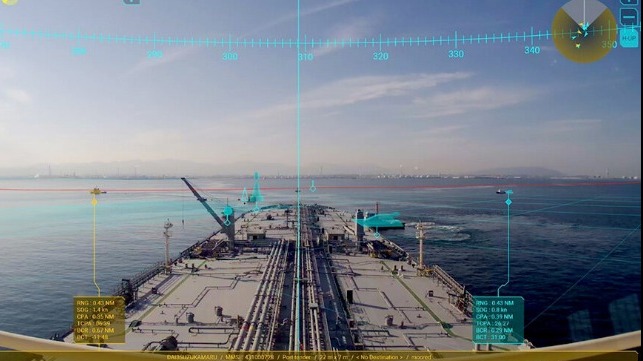 Two years after it introduced a navigation system using augmented reality (AR) technology to enhance navigational awareness, Japan’s Mitsui O.S.K. Lines announced upgrades to the capabilities as it also explores expanding the deployment of the technology more broadly across its fleet. The enhancements to the technology help navigators avoid dangerous shallow areas.

First installed in March 2018 aboard MOL’s new car carrier, Beluga Ace, the system jointly developed with Furuno Electric Co. displays information on other vessels sailing on a planned route and surrounding sea areas. The project partners’ goal was to support crewmembers, alerting them to other vessels they need to watch, the location of shallow waters, and other potential hazards, by displaying integrated real-time video images with information from nautical instruments on screens on the bridge.

The system integrates information from the Automatic Identification System (AIS) and radar with real-time video images from the bridge camera in collaboration with Furuno Electric’s Electric Chart Display and Information System (ECDIS). It provides visual support to crewmembers during their watch-keeping and ship operations by using AR technology to superimposing real-time video imagery and voyage information, displaying ocean conditions on the screens.

The current upgrade to the AR navigation system now enables it to automatically display borders between deep-sea areas where vessels can navigate safely and shallower areas that may pose risks. The previous system required a manual setting to display shallow areas, but this upgrade allows for automatic full-time display using a safety contour in red, yellow, or orange, supporting the navigators’ situation awareness visually.

MOL began demonstration testing of the system in October 2018 aboard the first of its VLCCs, Suzukasan, seeking to refine the AR display screen and verify the system’s effectiveness. The initial focus was on the VLCC fleet, a vessel type MOL notes that requires the highest level of operating safety Due to its deep draft, VLCC operations require special care when navigating on the waters such as the Straits of Singapore and Malacca, a heavily trafficked sea lane that has limited areas.

The AR navigation system has so far been installed on 24 MOL-operated very large crude carriers. MOL plans to expand the installation of the system to more vessels in the future and is proceeding with trials on ships in its energy transport fleet including LNG carriers, as well as dry bulkers.